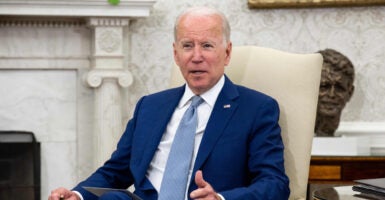 The Biden administration is doubling down on the color-conscious policies that were the hallmark of its first year in office through a series of “action plans.” Pictured: President Joe Biden speaks during a meeting with Chairman of the Federal Reserve Jerome Powell in the Oval Office of the White House on May 31. (Photo: Saul Loeb/AFP/Getty Images)

The Biden administration is doubling down on the color-conscious policies that were the hallmark of its first year in office through a series of “action plans,” which it released through every executive bureaucracy last month. Only this time, in a bid to avert legal reversals, the administration is concealing its racial spoils system under bureaucratic euphemisms.

As we explain in a new report, the administration’s 25 plans will implement discrimination as the official policy of the executive branch; make the government much less efficient; award contracts to uncompetitive bidders, thereby wasting taxpayer money, impair national defense, and further hamper the drive for excellence—or even adequacy—in the nation’s schools.

Evidence of how radical the equity action plans are can be seen in who participated in their conception. In the process of effusively praising the plans, the main Black Lives Matter organization revealed it had helped write them. Indeed, the Black Lives Matter Global Network Foundation said it worked with the Biden team on these barely hidden race-conscious policies since before it even got into office.

“The solutions in the plan are the result of tireless advocacy and organizing from the grassroots level and beyond, and we are heartened to see the result of so many racial justice advocates’ hard work be written into federal policy today,” said the Black Lives Matter Global Network Foundation in a statement.

The plans are part of the ongoing implementation of an executive order, “Advancing Racial Equity and Support for Underserved Communities Through the Federal Government,” which was the first thing President Joe Biden signed after taking office. They thus double down on “equity” measures that are at war with American ideals and the Constitution that call for equal treatment of all citizens under the law.

The word “equity” has come to mean the opposite of such equal treatment. In the hands of the Biden administration, and movement allies such as BLM, equity means that the government will treat Americans differently based not on need, but on race, membership in an ethnic category the government may have created for them in the first place, or on a predetermined victimhood status.

One of these victimhood umbrellas is the LGTBQ category, which means that special consideration for federal contracts, grants, and other benefits will be awarded to individuals based on their sexual preferences.

The equity plans therefore call for steering contracts and other kinds of federal procurement toward the administration’s favored identity groups.

In the context of hundreds of billions of dollars in annual federal contracting and procurement activity, this contact-steering could damage or benefit countless businesses based on the immutable characteristics of owners and employees, as well as personal sexual identifications and/or orientation.

The action plans concealed their racial aspects behind such euphemisms as “underserved,” “marginalized,” and “disadvantaged.” A look at the definitions of these terms in federal regulations quickly reveals, however, that they are mere synonyms for race or ethnicity.

The federal government, for example, defines the term “underserved communities” as “populations sharing a particular characteristic, as well as geographic communities, that have been systematically denied a full opportunity to participate in aspects of economic, social, and civic life, as exemplified by the list in the preceding definition of ‘equity.’”

Why all the subterfuge? Because such racially discriminatory policies violate the Constitution and are illegal under the Civil Rights Act of 1964. These types of racial quotas are not only forbidden by law, but they are reprehensible and overwhelmingly opposed by the public.

But having such race-consciousness dominating all government actions is the No. 1 objective of the far left that Biden finds himself beholden to now, at the end of a long career in which he showed nary an interest in civil rights measures.

Thus, the subterfuge. The administration appears to have begun its efforts to conceal its race-conscious policies in early 2022, after a year of blowbacks against its earlier explicit racially discriminatory approach.

The New York Times first reported on this con game on Feb. 15, when Lisa Friedman wrote that the administration was using a new tactic. “Worried that using race to identify and help disadvantaged communities could trigger legal challenges that would stymie their efforts, administration officials said they were designing a system to help communities of color even without defining them as such,” she wrote.

According to Friedman, Brenda Mallory, chair of the White House Council on Environmental Quality, “believed the strategy would lead the government to the same places as a race-based approach: communities of color.”

These 25 plans violate civil rights law, even if race is hidden behind such code words. The intent is clear: to put in place a racial spoils system that discriminates in the awarding of government employment, contracts, benefits, grants, and even in what is supposed to be the impartial administration of justice.

Not only is this against the law and fundamentally unfair, it is not what a country facing inflation and impending recession needs. Congress, and the courts, must step in to stop this.