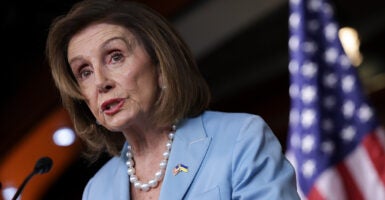 Speaker of the House Nancy Pelosi, pictured here at a press conference on May 19 at the U.S. Capitol in Washington, D.C., uses the Catholic faith and free will in an attempt to justify her pro-abortion stance. (Photo: Kevin Dietsch/Getty Images)

House Speaker Nancy Pelosi has developed a habit of invoking her Catholic faith—and often describing herself as a devout Catholic—whenever she is called upon to discuss her support for the deliberate killing of unborn children.

On Jan. 22, 2015, a reporter for CNSNews.com, where I am the editor, asked Pelosi about the humanity of a 20-week-old unborn child.

“When it comes to the matter of whether or not an unborn child is a human being at 20 weeks gestation, what is your personal take on it?” the reporter asked. “If it’s not a human being, then what do you believe it is?”

“And as a mother of five, in six years, I have great standing on this issue, great understanding of it, more than my colleagues,” Pelosi said in part of her answer. “In fact, one day many years ago, maybe even before you were born, when I was a new member of Congress, as a Catholic and a mom of five, opposing some of the initiatives similar to what—in the same vein as what we have today—one of the Republican members got up and said: ‘Nancy Pelosi thinks she knows more about having babies than the pope.’

“Yeah. Yeah. That would be true,” Pelosi said.

At another press conference at the Capitol last July 22, Pelosi sought to explain why she supports federal funding of abortion through Medicaid.

“It is something that has been a priority for many of us a long time,” Pelosi said.

“As a devout Catholic and mother of five in six years, I feel that God blessed my husband and me with our beautiful family—five children in six years, almost to the day,” she said. “But it’s not up to me to dictate that that’s what other people should do. And it’s an issue of fairness and justice for poor women in our country.”

Two months later, Pelosi brought to the House floor a bill that would legalize abortion nationwide through all nine months of pregnancy. At a Sept. 23 press conference, a reporter asked her about San Francisco Archbishop Salvatore Cordileone’s opposition to this bill.

“The archbishop of San Francisco warns that the bill is nothing more than a child sacrifice, and he calls on Catholics to fast and pray to defeat this bill,” the reporter asked. “You’re Catholic. Your reaction?”

“Yeah, I’m Catholic,” said Pelosi. “I come from a pro-life family, not active in that regard, different in their view of a woman’s right to choose than I am.”

“The archbishop of the city, that area of San Francisco, and I have a disagreement about who should decide this,” she said. “I believe that God has given us a free will to honor our responsibilities.”

But God has not given us a right to deliberately kill an innocent human being.

“Human life must be respected and protected absolutely from the moment of conception,” says the Catechism of the Catholic Church. “From the first moment of his existence, a human being must be recognized as having the rights of a person—among which is the inviolable right of every innocent being to life.”

The Catechism then quotes from the Book of Jeremiah: “Before I formed you in the womb I knew you, and before you were born I consecrated you.”

The Catechism further notes: “Since the first century the Church has affirmed the moral evil of every procured abortion. This teaching has not changed and remains unchangeable. Direct abortion, that is to say, abortion willed either as an end or a means, is gravely contrary to the moral law.”

On May 15, Pelosi appeared on CNN’s “State of the Union” with Dana Bash and discussed the impending Supreme Court decision in Dobbs v. Jackson Women’s Health Organization, which is anticipated to overturn Roe v. Wade.

“This is the first time the court has taken back a freedom that was defined by precedent and respect for privacy,” Pelosi said.

“So we have to fight the fight on the issue now,” she said. “I think that it would have an impact on the elections. But right now, I want everyone to just focus on what this does and what this means to you.

“And I say this as a practicing, devout Catholic: five children in six years and one week,” Pelosi said. “I don’t disrespect people’s views and how they want to live their lives. But I don’t think that it’s up to the Donald Trump appointees on the court or any politicians to make that decision for women.”

On May 19, Cordileone sent a notification to Pelosi.

“Pope St. John Paul II … frequently reminded us that ‘those who are directly involved in lawmaking bodies have a ‘grave and clear obligation to oppose’ any law that attacks human life. For them, as for every Catholic, it is impossible to promote such laws or to vote for them,” said the archbishop.

“A Catholic legislator who supports procured abortion, after knowing the teaching of the Church, commits a manifestly grave sin which is a cause of most serious scandal to others,” he said. “Therefore, universal Church law provides that such persons ‘are not to be admitted to Holy Communion.'”

“I also ask all the faithful of the Archdiocese of San Francisco to pray for all of our legislators,” said the archbishop, “especially Catholic legislators who promote procured abortion, that with the help and under the guidance of the Holy Spirit, they may undergo a conversion of the heart in this most grave matter and human life may be protected and fostered in every stage and condition of life.”