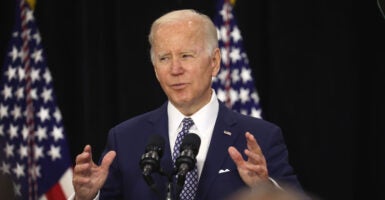 If the following news headlines were paired in an essay question on a high school Advanced Placement civics test, it might well be framed as “Compare and contrast.”

“Biden will travel to Buffalo on Tuesday following mass shooting, official says.”—CNN, May 15

“Psaki says Biden has NO [emphasis in original] plans to visit Waukesha after the deadly Christmas parade attack ‘at this time’ because sending the president to a community ‘requires a lot of assets.’”— Daily Mail, Nov. 29

How can one explain the Biden administration’s diametrically different responses to these two mass killings, one week shy of six months apart?

Granted Buffalo, New York, is less than half the distance from Washington, D.C., that Waukesha, Wisconsin, is, but does sending the president to upstate New York really require fewer “assets”?

On May 14, a gunman killed 10 people and wounded three others at a Buffalo supermarket. Eleven of the victims were black, two of them white. Facing a first-degree murder charge is Payton Gendron, 18, who is white.

Last Nov. 21, an SUV struck and killed six people and injured 62 others at a Christmas parade in Waukesha. Police said the driver deliberately drove in a “zig-zag pattern” to hit as many people as possible.

Darrell Brooks, now 40, was arrested and charged with six counts of first-degree intentional homicide and 77 other charges. Brooks is black. All six who died were white, as were most of those who were injured. As if to downplay the racist angle, however, CNN initially reported: “A car drove through a city Christmas parade, killing six people,” as though it was one of those newfangled self-driving cars.

Gendron and Brooks each posted hateful, incoherent, racist rants online before their attacks.

Given the particulars of the two massacres, then, one might be forgiven for suspecting President Joe Biden’s visit to Buffalo after shunning Waukesha was a partisan political calculus aimed at feeding red meat to his left-wing base. If true, that would be both shameless and indefensible.

Absent any other explanation, we’re left to conclude that Biden views some crime victims as more equal than others and, by extension, some perpetrators as more heinous than others. In point of fact, both Buffalo and Waukesha were incidents of domestic terrorism and deserving of equal condemnation.

While there’s a role for a president as “comforter in chief” in the face of senseless tragedies like these, it’s hard to see how it helps comfort those who are grieving over losing family members, friends, and loved ones for Biden to inject politics into what should be a somber and solemn occasion.

“White supremacy is a poison. It’s a poison. It really is. Running through our body politic. And it’s been allowed to fester and grow right in front of our eyes,” the president thundered May 17 in remarks at Buffalo’s Delavan Grider Community Center.

“We need to say as clearly and forcefully as we can that the ideology of white supremacy has no place in America. None,” he added.

While few if anyone would dispute that, Biden would have been on firmer ground had he also denounced, with equal vehemence, Brooks’ online anti-white screeds for what they were—black supremacy. Racism is despicable, regardless of the color of its practitioners.

“[W]e are seeing an epidemic of hate across our country that has been evidenced by acts of violence and intolerance,” Vice President Kamala Harris said in a statement the day after the Buffalo shootings. “We must call it out and condemn it. Racially motivated hate crimes or acts of violent extremism are harms against all of us, and we must do everything we can to ensure that our communities are safe from such acts.”

That’s a keen grasp of the obvious, Madame Vice President, but it would come across as more sincere if all hate crimes and mass killings were condemned equally, regardless of the race and ethnicity of the victims and perpetrators—and without regard to any perceived political advantage in condemning some, but not others.

This article first appeared at WashingtonTimes.com.