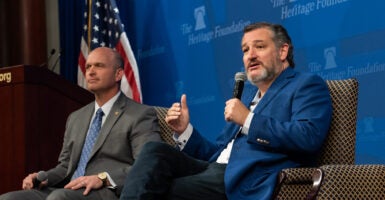 “When it comes to bitcoin and cryptocurrency generally, I am incredibly bullish,” the Texas Republican said, before adding that bitcoin is going through a process that “will change the world.”

Cruz spoke Monday at an event at The Heritage Foundation that revealed the boundless potential of digital currencies like bitcoin, but also exposed the dangers posed by government meddling in cryptocurrency and digital money.

During his remarks, Cruz described the myriad reasons Americans are flocking to cryptocurrencies.

There is a limited number of bitcoins in existence, and once the last one is produced, or “mined,” no more can be created. This is unlike fiat currencies like the dollar or euro, which are controlled by central banks. Because central banks can print more currency if they wish, reliance on fiat currencies runs the risk of inflation.

“As long as there have been centralized banks, as long as there has been government currency, the temptation to inflate your own currency is almost irresistible,” Cruz said. “One of the appeals of bitcoin is the stability of amounts.”

Second, Cruz said bitcoin is appealing because of its speed and lack of cost to transfer funds to someone else.

“Bitcoin is global. That means if you’re a subsistence farmer in Honduras, you may not have access to a secure store of wealth,” said Cruz. “Part of the beauty of bitcoin is it gives access to global finances instantly, no matter where you are.”

The senator added that one of the biggest advantages of bitcoin is that it is free from the control of central government authorities.

“There’s nobody in charge [of bitcoin]. That terrifies government decision-makers. Reflect on why Communist China has banned bitcoin. The answer is simple: They can’t control it.”

Cruz referenced the Freedom Convoy incident, when truckers staged a protest in Ottawa, Canada, against COVID-19 mandates. During those protests, Canadian Premier Justin Trudeau went after the truckers’ bank accounts and had them frozen.

When people began donating to the truckers in cryptocurrencies like bitcoin, the government was unable to stop them from receiving the funds.

After Cruz’s remarks, there was a brief question-and-answer session. I asked Cruz his thoughts on a proposed “digital dollar,” a currency that would give the government unprecedented control over how citizens spent their money.

Cruz explained that the only reason he felt a central bank would introduce a digital currency would be to better surveil the financial transactions of its citizenry.

Saylor said the American dream is alive in cyberspace, and that ordinary Americans can make their own way online.

“If what you want is the American dream, property rights, and freedom, sovereignty, you can move your life … into cyberspace where you might have the hope for freedom and … a decent life,” he said.

St. Onge then asked Lummis about the potential common ground between conservatives and bitcoin.

Lummis spoke about the need to balance a desire to innovate and improve on bitcoin and cryptocurrencies with the need to create an effective and easily understandable regulatory framework for Americans who want to interact with those currencies.

“It is important that we have a regulatory framework that presents a light touch for those who want to innovate in this space that do want to have some interaction with the U.S. dollar,” she said.

St. Onge then asked how bitcoin could fit into the conversation surrounding inflation.

Reinforcing what Cruz said earlier in the night, Lummis cited the limited supply of bitcoin, which makes it steadier than fiat currency like the dollar.

“Nothing about fiat currency is on a steady path,” said Lummis. “The government can print more money willy-nilly. And they do.”

“No one controls the levers of bitcoin, it’s predictable,” she added. “Nothing about what Congress is doing is predictable except for the fact that we’re going to print more money than we take in, our dollar is going to be worth less and less all the time, and that nobody cares.”

Lummis was asked a final question about the biggest things lawmakers need to get right about bitcoin, and what potential pitfalls could be as they attempt to legislate it. The senator cautioned her fellow lawmakers against overregulating bitcoin and cryptocurrencies at the risk of stifling innovation.

“Some people think bitcoin benefits from anarchy or lack of regulation. That’s not true,” he said. “At the point that there’s more clarity, I think lots of people will get involved and bad actors will get squeezed out of the industry.”