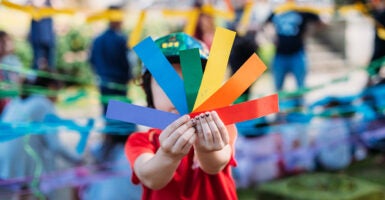 In the face of criticism after it became public, State Farm backtracked on a company initiative to increase LGBTQ-themed children's literature in schools and libraries. (Photo: Os Tartarouchos/Moment/Getty Images)

Following public outcry, State Farm Insurance said it has ended support for a project designed to place gender ideology books in children’s schools and in libraries.

A leaked State Farm email from January, addressed to the insurer’s agents in Florida, asked for volunteers to donate leftist gender ideology children’s books to local schools, community centers, and libraries to help “increase representation of LGBTQ+ books and support our communities in having challenging, important and empowering conversations with children age 5+.”

The publisher, A Kids Co., has taken on a woke narrative with many of its topics—racism, white supremacy, climate change, feminism, and identity, among others.

Due to media exposure and the ensuing public backlash, State Farm claims it is no longer affiliated with the GenderCool Project in distributing LGBTQ+ literature to schools and libraries, saying “conversations about gender and identity should happen at home with parents.” It adds, “We don’t support required curriculum in schools on this topic.”

However, State Farm stands behind the motivation for its initiative “intended to promote inclusivity” and pledged that it will “continue to explore how we can support organizations that provide tools and resources that align with our commitment to diversity and inclusion.”

While State Farm says it has halted support for GenderCool’s project to place gender identity books in schools and libraries, it said that it still supports “organizations providing resources for parents to have these conversations.”

The Daily Signal reached out to the GenderCool Project to ascertain whether State Farm still financially supports the organization as a whole, but did not receive a response. The insurance giant was still listed as a partner on the GenderCool Project’s website as of Tuesday morning, but has since been removed.

State Farm’s decision to stop distributing gender ideology books comes after Consumers’ Research launched a “Like a Creepy Neighbor” campaign and video aimed at informing State Farm customers of the company’s political activism. The campaign is a parody of State Farm’s long-standing advertising slogan, “Like a good neighbor, State Farm is there.”

Consumers’ Research has performed other investigations into woke corporations, such as American Airlines, Coca-Cola, and Nike.

“Agents were getting hundreds of calls within hours because people were livid about what State Farm has encouraged their agents to do,” he said. “They were wanting to cancel their policies, switch insurers, and demand answers. People were outraged that State Farm would target 5-year-olds and kindergartners with this type of bizarre propaganda.”

Hild said State Farm originally denied claims that it was encouraging agents to donate LGBTQ+ books to schools and libraries, but confirmed its involvement once confronted with the original email, as well as a screenshot of a school’s Facebook post thanking State Farm for donating the set of books.

Consumers’ Research “does not believe that the statement made to employees is in any way sufficient to even begin to remedy the damage that they’ve done,” Hild said. “There could be kids still reading these books today in public libraries or schools. This hasn’t ended just because they decided not to continue partnering with the GenderCool Project.”

Consumers’ Research has called on State Farm to hire a credible third party to audit each of its programs and initiatives that targets children. “We need to know every action that was taken, every book that was donated, and every interaction their employees have had with children,” Hild said. “Then, State Farm needs to make that audit and list of locations public and actively notify parents in the area.”

Jose Soto, a State Farm corporate responsibility analyst, authored the leaked email and wrote that the initiative was “a fantastic way to give back and an easy project that will help support the LGBTQ+ community and to make the world around us better.”

The partnership, according to Soto’s email, was for the purpose of helping “diversify classroom, community center and library bookshelves with a collection of books to help bring clarity and understanding to the national conversation about Being Transgender, Inclusive, and Non-Binary.”

Soto also encouraged State Farm agents committed to helping with the project to post about State Farm’s “commitment to diversity” on their personal social media platforms.

One LGBTQ activist accused State Farm of caving to what he called “anti-LGBTQ+ extremists” and of abandoning a project that provided what he said are age-appropriate materials to children.