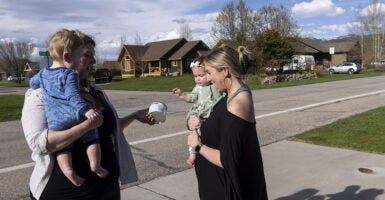 Baby formula shortages have left desperate parents with no idea where to turn to find food for their infants. Pictured: Alexis Adams, left, gives Mollie Wetzel a spare can of baby formula on May 16 in Victor, Idaho. (Photo: Natalie Behring/Getty Images)

Lawmakers pressed Food and Drug Administration officials and a baby formula manufacturer Wednesday at a tense congressional hearing on the massive formula supply shortages that are leaving infants hungry across the nation.

The hearing, held by the House Energy and Commerce subcommittee on oversight and investigations, was the first to focus specifically on the topic since the formula shortage reached crisis proportions.

Six days earlier, on May 19, the House Appropriations agriculture subcommittee summoned FDA Commissioner Robert Califf to testify on the shortage and possible solutions as part of a hearing on the budget request for the Department of Agriculture.

In September 2021, the FDA was made aware of possible Cronobacter sakazakii bacterial infections in babies that had consumed formula made at Abbott Laboratories’ Sturgis, Michigan, plant. Among those infections, at least two died.

Later reporting indicates that while the plant did test positive for the bacteria, none were found in the formula, and genetic testing of bacterial strains found at the Abbott plant did not match bacteria sampled from infected babies.

Regardless of the source of the initial infections, the plant wasn’t shut down until February, and seemingly no preparations were made to fill the void in production the shutdown of the Sturgis plant would cause.

Here are key highlights from Wednesday’s hearing on “Formula Safety and Supply: Protecting the Health of America’s Babies.”

1. Blame Who for Shortage: Abbott or FDA?

Lawmakers pressed both Abbott and the FDA over their respective responsibility for the baby formula shortage.

“One company alone does not bear the entire burden for landing us in this current situation,” said Rep. Diana DeGette, D-Colo., the chairwoman of the subcommittee. “There are also questions surrounding the timeline of FDA investigation response from a four-month lapse before returning to inspect the Sturgis facility, delayed connection with a former Abbott employee whistleblower, and slow communication to the American people.”

DeGette questioned Califf on why there was such a lengthy gap between the initial investigation at the plant and the FDA’s decision to take action.

“You’re right to be concerned, and the public should be concerned,” he said. “It was too slow, and decisions were suboptimal along the way.”

Rep. Morgan Griffith, R-Va., accused Calamari of a company culture problem at the Sturgis plant, contending that there had been multiple whistleblower reports in the past surrounding the plant.

Griffith asked Calamari what steps he was taking to change that company culture problem.

“I don’t think it’s a problem,” Calamari said. “We are working rigorously to address the [issues with the plant]. We’re going to learn from this.”

Rep. Gary Palmer, R-Ala., pressed Calamari on why Abbott didn’t address the concerns surrounding the bacteria immediately, instead of waiting for the FDA to force its hand.

“We prioritize safety and compliance at our plants, and we’re committed to getting better coming out of this event,” Calamari said.

“I’m not satisfied with the witness’ answer,” Palmer said.

Republican members of the panel hammered the Biden administration and the FDA over their delayed response to the formula shortage.

“Why did it take an onslaught of national media attention for the Biden administration to act with the sense of urgency that is required to adequately address an infant formula shortage?” Griffith asked. “Was the administration aware that an infant formula shortage was developing for over two years and failed to take sufficient action to prevent the shortage from getting worse? Or were they caught flat-footed?”

Rep. Cathy McMorris Rodgers, R-Wash., said, “When Abbott’s Sturgis plant closed in February, the Biden administration should have likewise acted with urgency to increase supply on Day One. Instead, the FDA didn’t act decisively until parents and the media coverage forced them to move publicly.”

Griffith pressed Califf on why it was taking so long to get the Sturgis plant back up and running, given the months between when the plant was initially closed and when the whistleblower report was revealed.

“Abbott actually started remediating the plant, but it was so bad,” said Califf. “There were so many steps in this, even though they’ve been working on it since Day One. They’re still not ready to go, but they will be in the next several weeks.”

3. Why Did Whistleblower Report Languish?

Palmer questioned Frank Yiannas, the FDA’s deputy commissioner for food policy and response, on how it was possible that he didn’t see the whistleblower report citing health and safety issues at the Abbott plant.

Palmer referred to a report from The Washington Post that asserted the initial whistleblower complaint took nearly four months to reach Yiannas’ desk.

“Mr. Yiannas, you’re the deputy commissioner for food policy and response, yet neither of the FDA’s food policy divisions report to you, nor do the food policy inspectors. Is that true?” Palmer asked.

Palmer then asked the deputy commissioner when he was made aware of the report. Yiannas confirmed it wasn’t until Feb. 10.

“How is it that it got tied up in the bureaucracy and it didn’t get to the person who, arguably, should be responsible for responding to it?” asked Palmer.

“I’m not sure why the report wasn’t shared with me and how it didn’t get escalated,” Yiannas said. “I know that there’s going to be a review, and we’re going to try to get to the bottom of it.”

“This is stunning to me,” Palmer responded. He then asked Califf whether whistleblower reports often were not sent to the correct parties.

“That’s not my question,” Palmer said before asking Yiannas whether he had faced any obstacles to unifying the food divisions in an effort to prevent issues such as the baby formula crisis from happening again.

“According to The Washington Post, you were told to stand down in that effort to reorganize,” said Palmer. “In my opinion, the FDA focuses more on medical issues than they do food issues.”

Yiannas responded that the Post report referred to an earlier stage of the investigation into the Sturgis plant that would have been led by then-acting FDA Commissioner Janet Woodcock.

Palmer emphasized the need in the future to “have the right structure at the FDA to make sure this doesn’t happen again.”

4. How to Prevent It From Happening Again

Rep. Kathleen Rice, D-N.Y., asked Califf what the agency planned to do in the aftermath of the baby formula crisis to prevent it from happening again.

Califf said there needed to be new systems put into place to ensure information like the report indicating Cronobacter bacteria were found at the Sturgis plant gets into the hands of FDA officials faster. Additionally, the commissioner would like to see escalation requirements—what needs to be reported to higher levels of authority—made stricter.

He added that even with those steps in place, there would still be vulnerabilities in the system.

“We have a very tired, overworked workforce that, in the midst of an [ongoing] pandemic, is underfunded,” he said. “[The FDA] is really straining to use human labor to do things that computers could do automatically.”

5. What Do Parents Do With Plant Still Shut?

While the plant remains out of operation, families are hard-pressed to find baby formula.

Rep. Frank Pallone, D-N.J., asked Califf about where concerned parents should go to get information about the shortage and where to find formula.

“I think it’s really important for people to go to the [Department of Health and Human Services] website,” Califf said. “There, you’ll find … helpful information about where to go.”

Pallone later pressed Calamari, the Abbott executive, on what Abbott was planning to do to relieve parents affected by the plant shutdown in the meantime.

“We are daily getting six to eight flights from [an Abbott plant in] Cootehill, Ireland, … and we will be delivering millions of cans [of formula] in the weeks to come,” Calamari said.