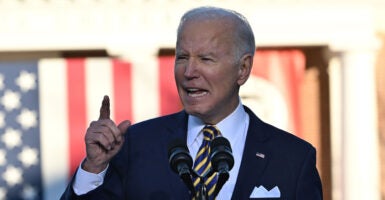 President Joe Biden speaks about voting rights in Atlanta on Jan. 11. Biden says in the speech, "Do you want to be on the side of Abraham Lincoln or Jefferson Davis?" (Photo: Peter Zay/Anadolu Agency/Getty Images)

According to Georgia Secretary of State Brad Raffensperger, as of May 20, 857,401 Georgians had voted during the state’s three-week early voting period for the Georgia primary elections. This number is up substantially from just a few years ago.

It’s the first election under Georgia’s new voting law, which, among other things, required voter ID, prevented electioneering when Georgians are waiting in line to vote, and added additional days to vote early.

“Short lines, smooth easy ballot access, and confidence in ballot security brought out more than 850,000 to cast a ballot in person or return an absentee ballot,” the secretary of state’s office said in a statement. “Compared to early-voting turnout in recent primaries, this represented a 168 percent increase over the 2018, the last gubernatorial primary, and a 212 percent jump above 2020, the last presidential primary year.”

But wait, weren’t we told that Georgia’s new law was basically the end of democracy?

When it passed in 2021, the law was met with a deluge of attacks from Democrat politicians and hysterical media.

Corporations competed to out woke each other by putting out statements about how it was against their values and democracy.

Yes, being in favor of requiring an ID for citizens to vote and allowing for extended early voting—policies that a vast majority of Americans support—makes you just like pro-slavery secessionists, according to our uniter-in-chief.

There is no evidence whatsoever that there is any kind of voter suppression. In fact, it looks like people are showing up in droves and casting their votes with little problem.

Even The Washington Post reported that voting numbers are up substantially in Georgia:

[A]fter three weeks of early voting ahead of Tuesday’s primary, record-breaking turnout is undercutting predictions that the Georgia Election Integrity Act of 2021 would lead to a falloff in voting. By the end of Friday, the final day of early in-person voting, nearly 800,000 Georgians had cast ballots—more than three times the number in 2018, and higher even than in 2020, a presidential year.

The Post was among the most aggressive outlets peddling the “voter suppression” nonsense. This is why this line, from a 70-year-old black woman quoted in the Post piece, is interesting:

I had heard that they were going to try to deter us in any way possible because of the fact that we didn’t go Republican on the last election, when [Donald] Trump didn’t win. To go in there and vote as easily as I did and to be treated with the respect that I knew I deserved as an American citizen—I was really thrown back.

Why would she have the false impression that the state would deter her from voting? Perhaps The Washington Post should investigate.

According to the secretary of state’s office, about three times as many black voters cast early votes compared to 2018. There’s been record-high turnout for minorities in general, though this might not be working out quite like how Democrats imagined it.

The reality of Georgia’s first election under the new voting law appears to be a far cry from the horrible, oppressive return of the Jim Crow era, as we were led to believe would happen.

Instead, it looks like voters are showing up in droves, no longer standing in long lines due to the early voting extensions, and in many cases may have increased trust in the legitimacy of the process.

“It is clearer than ever that Gov. [Brian] Kemp and Georgia Republicans’ efforts to make it easy to vote and hard to cheat have expanded ballot access and secured the vote, leading to more trust in the system among the electorate and a record boost in turnout,” Heritage Action President Jessica Anderson said in a statement to The Daily Signal. “Heritage Action is proud to have played a role in educating Georgians about these new election integrity laws and boosting voters’ confidence in the system.”

Those who portrayed voter integrity laws as the new Jim Crow should have to eat crow after the Georgia election.