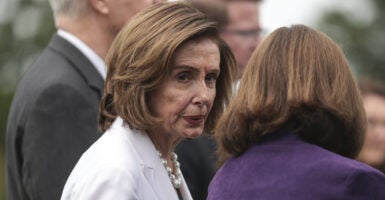 Speaker of the House Nancy Pelosi, D-Calif, has been denied Communion by Archbishop Salvatore Cordileone. Pictured: Pelosi attends a press conference to celebrate the 25th anniversary of the New Democrat Coalition on Capitol Hill May 18 in Washington, D.C. (Photo: Oliver Contreras/Getty Images)

The archbishop of San Francisco, Salvatore Cordileone, has announced he will no longer allow House Speaker Nancy Pelosi to receive Communion because of her refusal to adhere to Catholic doctrine on unborn human life. This continues a battle between Catholic politicians who claim fealty to their church—but not to one of its central tenets—and some of their church’s leadership.

Pelosi, who invokes her faith when it comes to “climate change,” recently claimed Catholic opinion about abortion goes back only a few hundred years and theologians have been divided over many centuries. This brought a rebuke from several Catholic prelates, who said the Catholic Catechism has remained consistent on human life since the first century.

The creeping influence of what Scripture calls “the world” has not only infected many Roman Catholics, like Pelosi and President Joe Biden, but also certain self-proclaimed evangelicals. One is the left-leaning Sojourners magazine.

In his second inaugural address, Lincoln alluded to the conflicting advice he received from different clergymen: “Both read the same Bible and pray to the same God and each invokes his aid against the other.”

Except when it comes to abortion, the left does not and cannot accurately use Scripture to justify its pro-choice position. Our right to life, wrote Thomas Jefferson, is “endowed by our Creator,” not the state.

I suspect most Catholics and evangelicals would claim a high view of Scripture and that it means what it says (like conservatives view the Constitution). Why, then, do so many seek a fusion between church and state that harms both?

Some people try to “cherry pick” Scripture to justify positions on contemporary issues, but when it comes to human life it doesn’t work.

Here are a few verses that Pelosi and Taylor might wish to consider: “Before I formed you in the womb, I knew you. Before you were born I set you apart” (Jeremiah 1:5). “For you created my inmost being; you knit me together in my mother’s womb … I am fearfully and wonderfully made.” (Psalm 139:13-14).

In the New Testament when the pregnant Mary visits the pregnant Elizabeth—a distant cousin—the unborn John the Baptist leaps within Elizabeth’s womb, prompting her to say, ” … why am I so favored that the mother of my Lord should come to me?” (Luke 1:43). Not the mother of her fetal or potential Lord, but present tense.

Too many Christians (including many conservatives when it comes to some politicians and issues) are increasingly embracing attitudes of the secular world. Here’s a verse that warns against such thinking: “Do not conform to the pattern of this world, but be transformed by the renewing of your mind. Then you will be able to test and approve what God’s will is – His good, pleasing and perfect will.” (Romans 12:2).

Perhaps the most sobering verse of them all is this one: “You adulterous people, don’t you know that friendship with the world means enmity against God? Therefore, anyone who chooses to be a friend of the world becomes an enemy of God” (James 4:4). All verses are from the NIV translation.