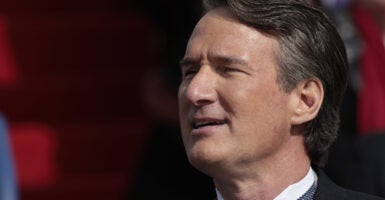 Virginia boasts a whopping 76% of eighth graders who were proficient in reading in 2019, but just 33% of them scored as proficient in reading on the National Assessment of Educational Progress. Pictured: Gov. Glenn Youngkin delivers his inaugural address on the steps of the State Capitol on Jan. 15 n Richmond. (Photo: Anna Moneymaker/Getty Images)

Virginia is home to the largest education “honesty gap” in the country, according to a new report released by Gov. Glenn Youngkin’s 4-month-old administration.

The report, “Our Commitment to Virginians: High Expectations and Excellence for All Students,” details what it calls “a clear and sobering lesson on the consequences for students when state leaders lower academic standards and dismantle accountability.”

The honesty gap—the difference between Virginia students’ proficiency on Virginia’s Standards of Learning tests and their documented proficiency on the National Assessment of Educational Progress, which assesses student performance across the country in math, reading, science, and civics—is stark.

Similarly, although 77% of Virginia’s eighth graders scored proficient in mathematics on the Standards of Learning in 2019, that figure drops precipitously to just 38% of eighth graders as assessed by the National Assessment of Educational Progress. The same honesty gap exists for younger students, too.

As the Youngkin administration report notes, “Virginia is the only state to define proficiency on its fourth grade reading test below the National Assessment of Educational Progress basic level and also sets the lowest bars in the nation for fourth grade math and eighth grade reading.”

And as Youngkin administration officials put it, “The perception of how Virginia thinks children are doing in school is different than reality.”

The new report points to other data showing evidence of academic decline in the commonwealth. In 2014, Virginia was third in the nation for students graduating with qualifying Advanced Placement scores. By 2021, in a matter of just seven years, the state had fallen six slots to ninth place.

Part of this could be explained by what the report refers to as “past state policy decisions to lower proficiency benchmarks” that “resulted in Virginia having the lowest expectations for student proficiency in the nation.”

Specifically, during the administrations of former Govs. Terry McAuliffe and Ralph Northam, both Democrats, accreditation standards were lowered to reduce expectations for student proficiency. Youngkin, who defeated McAuliffe in November, is a Republican.

The report explains that Virginia will raise proficiency cut scores on the Standards of Learning to close the “honesty gap” and restore rigor in the state’s assessment system. And it also addresses other issues that are top-of-mind for many parents, like discrimination through the application of critical race theory.

The Youngkin administration states in the report that public schools in the commonwealth will have zero tolerance for discrimination: “We will not allow the ascribing of traits or behavior based on race, gender, political beliefs, or religion.”

Specifically, the report states that “we will not tolerate violations of Title IV and Title VI of the Civil Rights Act of 1964, including policies, programs, training, and curricula that advance discrimination.”

This is a key component of a parents’ bill of rights and is a good step in the right direction. As Jonathan Butcher and I recently outlined, parents’ bills of rights, which are gaining attention across the country, should include four key elements. They should:

There are other notable goals in the report, including the commitment to protect freedom of speech and inquiry: “A great education must address complicated and uncomfortable topics in ways that support critical thinking and vigorous classroom discussions—without injecting trendy political views or inhibiting free speech,” the report reads.

The report also stresses civics education that emphasizes foundational documents such as the Declaration of Independence, the U.S. Constitution, the Virginia Constitution, and the Bill of Rights.

As was the case in states across the country during COVID-19, homeschooling saw a 56% increase in Virginia from the 2020-21 school year to the 2021-22 school year. But most of those families have chosen to continue homeschooling—some out of dissatisfaction with Virginia public schools—even though schools are once again open to in-person instruction.

Parents didn’t like what they saw when they had the chance to examine what their children were learning. Coupled with what the report has identified as the “honesty gap” in student proficiency, it’s no wonder Virginia was home to some of the most contentious school board meetings in the country last year.

Virginia should continue to build on this report by providing transparency around school content to families, allowing parents to view all textbooks and curricular materials online, and ultimately advancing private school choice for students through universal education savings accounts.

But this report represents the beginning of an important course correction. The Youngkin administration has laid the groundwork for increased transparency around school outcomes, protection of free inquiry in the classroom, and prohibitions on the application of critical race theory in ways that violate the Civil Rights Act of 1964.