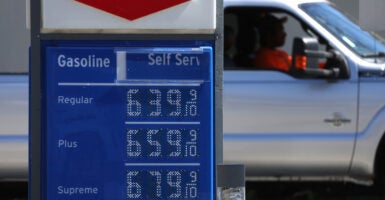 Sen. John Barrasso, R-Wyo., introduced two energy bills that will help remove policies from the Biden administration that are contributing to the exorbitant energy prices that Americans are paying. Pictured: Gas prices over $6 per gallon are displayed at a Chevron gas station May 20, 2022, in the San Francisco Bay Area. (Photo: Justin Sullivan/Getty Images)

Sen. John Barrasso, R-Wyo., introduced two energy bills last week that are worth paying attention to. But first, consider a few statistics for some context, and why it’s good to see the senator, and those with him, step up.

Americans get 70% of all their energy from oil and natural gas, and 94% of Americans’ transportation fuel comes from oil and natural gas. Despite the onset of renewable energy technologies, global demand for oil and gas hasn’t changed much and doesn’t look like it will in the future. While no one knows what the future holds, the U.S. Energy Information Administration projects global energy consumption will increase 50% by 2050, and projects no scenario in which oil or natural gas use declines.

This is a good thing in light of the billions of people still living in energy and economic poverty, and the myriad ways oil and natural gas make Americans’ lives better.

These kinds of numbers should inform policymakers’ views of reality when it comes to energy policy. Yet President Joe Biden and his administration are working hard to bend reality to their preferred version of one without oil and natural gas (or coal) in the United States.

Amazingly, high energy prices have not swayed Biden or his administration to change course or at least pump the breaks on their regulatory agenda to forcibly phase out production and use of oil and natural gas in the United States.

Just recently, the Department of Interior canceled the only three scheduled offshore oil and gas lease sales after months of bureaucratic slow walking. It has failed to develop a new five-year offshore leasing plan in time before the current one expires at the end of June, and is slow walking permits for existing oil and gas leases.

Onshore, Biden’s Department of Interior will hold its first oil and gas lease sale in June, only after being compelled by a court order and only after decreasing available land by 80% and increasing federal fees by 50%.

Whatever its claims and protestations about “Putin’s price hike,” the Biden administration continues to show by its actions that it has no intention of removing the inflationary regulations that are causing higher prices Americans are facing. Even fellow Democrats are starting to get frustrated.

What is especially disturbing, though, is that oil and gas leases are responsibilities Congress mandated the Department of Interior fulfill by law. When a president and his administration believe they are above the law, all Americans should be concerned.

Thankfully, states are standing in the gap and taking the administration to court on several fronts. And Congress is stepping up. In particular, Barrasso introduced the Lease Now Act and ONSHORE Act last week.

The Lease Now Act eliminates what little ambiguity the Biden administration has been abusing in existing laws to slow walk lease sales on federal lands and waters designated for oil and gas activities. The bill sets clear timelines, parameters for lease terms, and consequences for failure to execute the law so that the administration cannot symbolically follow the law while maintaining a de facto moratorium on oil and gas leases.

The ONSHORE Act goes a step further, improving management of energy production on federal lands by elevating the role of states. In short, the bill would allow states with federal lands designated for energy production to apply to conduct regulatory and permitting processes for oil and gas development themselves. It also makes the long overdue move to elevate the role of local Native American tribes to regulate hydraulic fracking activities on their lands.

This makes sense for many reasons, not least of which being that states already oversee oil and gas production on private and state lands within their borders. Similar agreements with states have also worked to great effect with the Nuclear Regulatory Commission, the Environmental Protection Agency, and the U.S. Forest Service.

The bill clearly exempts federal lands not designated for oil and gas activities (like national parks) and includes backstops in case a state is failing in its duties. It’s exactly the direction federal land management needs to be going.

The Biden administration has a lot of cards in its hand to use and abuse regulatory power. Congress needs to get back in the game to hold the administration accountable to the law and remove policies that are contributing to the exorbitant energy prices Americans are paying. These bills are a very good start.