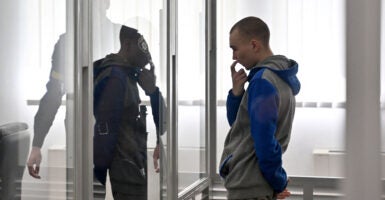 Sgt. Vadim Shishimarin, a Russian tank commander, listens to his sentence in the defendant's box Monday, the last day of his trial in a Kyiv court for committing a war crime by intentionally killing an unarmed civilian. (Photo: Sergei Supinsky/AFP/Getty Images)

Ukraine used its own justice system to secure the nation’s first conviction of a Russian soldier Monday for committing a war crime, but officials are interested in taking other cases to the International Criminal Court.

Sgt. Vadim Shyshimarin, 21, a captured tank commander, pleaded guilty in a Ukrainian criminal court to shooting an unarmed 62-year-old man in the head in the early days of the invasion. The court sentenced Shyshimarin to life in prison.

Ukrainian Prosecutor General Iryna Venediktova is engaged in investigations and prosecution of crimes committed during Russia’s invasion of Ukraine.

Complicating matters is that Venediktova, in addition to prosecuting Russians for war crimes in Ukraine, wants the International Criminal Court—an appendage of the United Nations—to prosecute cases.

The United States, while supportive of the Ukrainian efforts, continues not to be a party to the ICC.

Here’s what to know about the unfolding issue of prosecuting war crimes in Ukraine.

1. Could Putin Be Prosecuted?

President Joe Biden has called Russian President Vladimir Putin a “war criminal” because of brutality toward Ukrainian civilians during the invasion.

Putin ordered the Feb. 24 invasion of Ukraine, and none of the Russian commanders or rank-and-file soldiers would be there without his order.

Nevertheless, it’s unlikely that Putin actually would be prosecuted by any government or international body, knowledgeable observers say.

“Even if the oligarchs turn on him, I suspect he will be permitted a soft landing,” Groves said.

Instead, prosecutions likely will be aimed at Russian soldiers directly involved in combat in Ukraine, he said.

A veteran Russian diplomat, Boris Bondarev, announced his resignation Monday in a letter first reported by The Associated Press.

In the letter, referring to Russia’s invasion of Ukraine, Bondarev writes: “For 20 years of my diplomatic career I have seen different turns of our foreign policy, but never have I been so ashamed of my country as on Feb. 24 of this year.”

2. How Would Prosecutions Occur?

Venediktova, Ukraine’s prosecutor general, is pursuing war crime trials in the International Criminal Court in The Hague, Netherlands, and asked for international help in prosecutions, including gathering evidence.

The court was created in 2002 by the Rome Statute, an international agreement negotiated in the 1990s. The United States, then under the Clinton administration, didn’t enter the agreement.

Under subsequent presidential administrations of both parties, the U.S. also did not become a party to the Rome Statute.

As Garland and the other attorneys general indicated, accountability for war crimes could be carried out through the Organization for Security and Cooperation in Europe, and inside Ukraine and potentially other nations.

Neither Russia nor Ukraine are parties to the Rome Statute that created the ICC, which means it is a court of last resort and any such prosecutions mostly would be left to authorities of those two nations.

“The Biden administration should heed Ukraine’s call for assistance, but it should also acknowledge and act consistently with longstanding U.S. policy under multiple administrations to oppose ICC assertions of jurisdiction over non-parties to the Rome Statute, the court’s founding treaty,” says a Heritage Foundation report coauthored by Groves and released last month.

An ICC investigation’s scope could encompass alleged war crimes in Ukraine—whether committed by Russia or Ukraine, according to the report co-written by Brett Schaefer, Heritage’s Jay Kingham senior research fellow in international regulatory affairs in the Thatcher Center.

3. What Attorneys General Have to Say

Adding their names to the May 19 joint statement with Garland were the attorneys general of four allied nations: Suella Braveman of the United Kingdom, Katy Gallagher of Australia, David Lametti of Canada, and David Parker of New Zealand.

Their joint statement says, in part:

We support the pursuit of justice by Ukraine and through other international investigations, including at the International Criminal Court, the United Nations, and the Organization for Security and Cooperation in Europe, and in our own jurisdictions, in order to the ensure prompt, fair and effective investigation and prosecution of such offenses under Ukrainian, domestic or international law.

We join in condemning the Russian government for its actions, and call upon it to cease all violations of international law, to halt its illegal invasion and to cooperate in efforts to achieve accountability. We look forward to working together with the Prosecutor General and her office to ensure every perpetrator faces justice.

Groves said he supports the five officials’ message because it reads like a statement backing Ukraine’s pursuit of its own investigations of apparent war crimes by the means of Ukraine’s choice, rather than exclusively supporting the ICC’s authority.

A key concern by the United States over the past 30 years is that the International Criminal Court would push politicized investigations.

“The long-held bipartisan position of the U.S. is that the ICC does not have jurisdiction over any country unless that country has ratified the Rome Statute, has voluntarily submitted to the ICC’s jurisdiction, or is referred to the court through a U.N. Security Council resolution,” Heritage’s recent report says. “The U.S. has maintained this position since the 1990s, when the Rome Statute was negotiated.”

This concern about politicized prosecutions has been borne out by the court’s investigations into alleged war crimes by the United States in Afghanistan and by Israel in the Palestinian territories.

In each instance, the ICC asserted authority over nations that aren’t parties to the Rome Statute, according to the Heritage report:

Nonetheless, the U.S. has taken actions in the past to support various ICC prosecutions, including abstaining on a U.N. Security Council referral of the situation in Sudan to the ICC and voting in favor of a resolution referring the situation in Libya to the ICC. In addition, the U.S. has turned individuals sought by the ICC over to the court and allowed the State Department’s Rewards for Justice Program to be used for information leading to the arrest of individuals sought by the ICC. These efforts are well-intentioned and consistent with America’s desire to assist ICC efforts ‘to bring to justice … foreign nationals accused of genocide, war crimes and crimes against humanity.’

On another front, since 2002 the International Criminal Court has gained only 10 convictions, and many individuals have evaded ICC warrants for years, particularly government officials, the report notes.

Thus, the report contends, Ukraine should not rely on the ICC to handle alleged war crimes.

“As is its sovereign right, Ukraine has accepted the jurisdiction of the ICC,” the report says, adding:

The U.S. need not endorse ICC jurisdiction over Russia in supporting Ukrainian efforts to ensure justice and accountability. The U.S. should collect and preserve evidence of crimes and share that evidence with Ukraine. It is up to Ukraine to choose the mechanism of justice, whether it is domestic courts, the ICC, or some other arrangement.