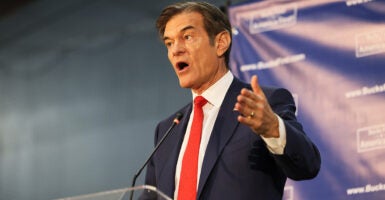 Pennsylvania's outdated election code is leaving millions of voters in limbo as they wait for the close call between GOP Senate candidates Dr. Mehmet Oz and Dave McCormick. Pictured: Oz speaks during a forum on May 11 in Newtown, Pennsylvania. (Photo: Michael M. Santiago/Getty Images)

Once again, the nation is waiting on Pennsylvania to count the votes in a close election. Roughly 1,100 votes separate GOP Senate candidates Mehmet Oz and Dave McCormick, with fewer than 10,000 mail-in votes remaining as of Friday. Like 2020, Pennsylvania’s notoriously slow counters are leaving two candidates and millions of voters in limbo.

One major cause: Unlike Florida and many other states, Pennsylvania does not allow mail ballots to be processed before Election Day. Pre-processing was part of a reform package lawmakers passed last year to modernize Pennsylvania’s outdated election code, but Gov. Tom Wolf vetoed it.

Pennsylvania’s experience is proof that we cannot bury our heads in the sand. The longer we deny there are problems with our elections, the longer voters are forced to live with them.

Americans are fed up. They want elections they can trust, and fresh polling shows that the public is united behind commonsense voting reform.

States across the nation are making great strides toward better elections. From Georgia to Texas to—just days ago—Missouri and South Carolina, states are taking the slack out of elections. Each approach is different, but all are committed to the principle that it should be easy to vote but hard to cheat.

There are many areas for improvement, but effective reform has a few key elements. First, every state should adopt a photo ID law and apply it to every ballot cast in an election, whether in person or by mail.

Vulnerable mail ballots need safeguards. Numerous states have banned vote trafficking by political operatives, a practice so abuse-prone a commission co-chaired by Jimmy Carter admonished states to ban it. If drop boxes are used, they must be monitored, secured, and deployed evenly statewide. Ballots should be received by Election Day and pre-processing allowed so vote counts are timely.

Election laws need to be clear, and they need to be written by lawmakers. In 2020, partisan lawyers bankrolled by endless left-wing “dark money” used the courts to force partisan changes to voting rules, according to Fox News. Sometimes, liberal state officials appeared to collude with partisan plaintiffs, the outlet reported.

Lawmakers can stop these abuses and ensure election rules are followed.

Private funding of election administration should be cut off. In 2020, two nonprofits doled out over $400 million, giving more per capita to jurisdictions that voted Democrat. Exposing elections to the corrupting influence of special interests isn’t worth the risk to public trust.

States need to bolster transparency through audits and performance reviews that are completed after every election. Officials should be held accountable when they are negligent or purposely violate the law.

Finally, states should ban noncitizen voting. New York City recently became the vanguard of a growing left-wing push to enfranchise foreign citizens, but nearly 9 in 10 Americans reject that policy. Only citizens should vote in American elections.

All of these policies are overwhelmingly popular. Voter ID is a case in point: 84% think everyone should show a photo ID to vote. Left-wing activists call photo ID laws “Jim Crow 2.0,” but 72% of black voters and an incredible 90% of Hispanics support them. And in Georgia, where lawmakers recently bolstered ID laws, turnout is surging to record levels—proving once more that claims of racism are meant only to stifle debate and suppress the consensus that elections need to be secured.

It is time to set aside partisan politics and strengthen election integrity laws in every state. The sooner we do, the sooner we can give Americans what they want: elections where it’s easy to vote and hard to cheat.