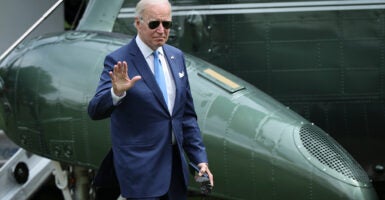 President Joe Biden, pictured here at the White House in Washington, D.C., on May 18, can’t lower gas prices until he acknowledges how his own policies—killing the Keystone pipeline and hating fossil fuels—have played into rising prices. (Photo: Win McNamee/Getty Images)

The price of gas keeps rising.

“The reason for that is because of [Russian President Vladimir] Putin’s war,” President Joe Biden said.

But that’s impossible. Most of the price rise came before Putin attacked Ukraine.

This is just economic ignorance, as my new video explains.

“If big oil could raise prices anytime they wanted and get away with it, then why were they so cheap in 2020, 2019, 2018?” asks the Competitive Enterprise Institute’s Ben Lieberman.

Lieberman points out that companies are always greedy. Greed didn’t just start now. They were just as greedy when gas prices fell in 2019 and early 2020.

“It all comes down to cutting back on supplies,” says Lieberman.

It’s not complicated. Prices change because of supply and demand.

During the COVID-19 pandemic, fewer people drove, and demand for gasoline dropped. So did its price. Oil drillers then did less drilling. Now demand is up because people are driving again.

But it takes time for producers to adjust.

“It takes months, not days, for a company to increase production,” says Biden.

I’m relieved that the president understands that, but he ignores how his own policies reduce production and raise the price of gas. He didn’t mention that when he canceled a long-planned sale of offshore oil rights this week.

Activists want Biden to also kill a pipeline that would bring oil from Canada to Wisconsin. They’ve already delayed it five years. They delayed the Keystone pipeline for 16 years, until Biden killed it altogether.

This is so dumb. Stopping pipelines doesn’t even help the environment. Oil still gets shipped, but by truck, train, and barge. That leads to more oil spills.

At least one congressman is as foolish as the activists.

“Are you embarrassed as an American company that your production is going up?” Khanna said to Chevron CEO Michael Wirth.

“Demand for energy is going up in the world,” Wirth responded, reasonably.

“Would you commit to reducing the production of oil?” Khanna asked ExxonMobil CEO Darren Woods.

Hilariously, now that gas prices are up, Khanna goes on TV to complain that oil companies don’t produce more oil. “They’re still not increasing the production,” he whines.

I tried to interview Khanna about his hypocrisy, but he won’t talk to me.

“It’s amazing what $4 a gallon gasoline in an election year will do to cause some people to change their minds,” says Lieberman.

“We have to protect the Earth,” I say to Lieberman. “Sometimes the market isn’t the best director.”

“There is pollution, and there is a reason to address it,” Lieberman responds. “But we have to be realistic … these threats are repeatedly exaggerated.”

“[But in] the public debate, you’re losing. They’re winning,” I point out.

“At $4 a gallon gasoline, I think we’re seeing a rethinking of the climate agenda,” Lieberman replies.

Biden, at his State of the Union address, did say his top priority would be “getting prices under control.”

But he can’t get gas prices under control without more use of those hated fossil fuels.

“The Biden administration either has to choose between affordable energy or the climate agenda,” says Lieberman. “It can’t do both.”