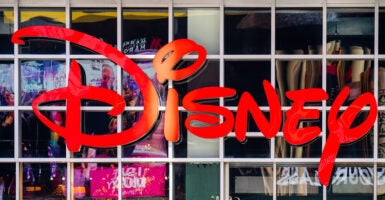 The Walt Disney Co. appears to have taken a major fall in the American public's view because of its woke attitudes, researcher and journalist Christopher Rufo says. Pictured: The Disney logo on display in New York City on Feb. 20, 2020. (Photo: Alex Tai/SOPA Images/LightRocket/Getty Images)

Women who want to appear to be men now can buy “compression tops” at Target to hide their breasts. Starbucks, among other companies, will pay travel costs for employees to have an abortion if they live in a state that restricts the procedure. And Disney says it’s outraged that kindergarteners can’t be taught gender ideology in Florida public schools.

Some of America’s biggest businesses increasingly are embracing far-left ideology, and that may be affecting consumers’ opinions about those businesses.

“The share of Americans with a favorable impression of Disney has collapsed from 77% last year to just 33% today,” Christopher Rufo, a senior fellow at the Manhattan Institute and contributing editor at City Journal, reports.

The streaming service Netflix, for one, may have noticed Disney’s falling star. Netflix recently released a memo to employees stressing the company’s commitment to a diversity of views and opinions in its content.

“As employees we support the principle that Netflix offers a diversity of stories, even if we find some titles counter to our own personal values,” the memo reads. “Depending on your role, you may need to work on titles you perceive to be harmful. If you’d find it hard to support our content breadth, Netflix may not be the best place for you.”

On today’s edition of the “Problematic Women” podcast, we discuss why some Americans are likely weary of the left’s radical agenda infiltrating America’s businesses.

We also share what we saw at the recent pro-abortion women’s march in D.C. And as always, we crown our Problematic Woman of the Week.