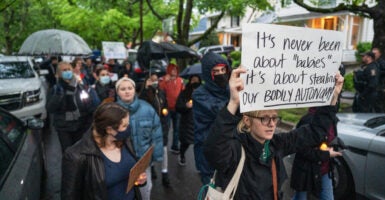 The bill takes effect Oct. 1 and bans any protesting at personal dwellings with the intent to “harass or disturb” the resident. Violators will be charged with a second-degree misdemeanor and will be subject to a possible 60 days in jail and/or a $500 fine if they do not leave the premises when warned by a law enforcement officer.

HB 1571’s text notes that “the state has a significant interest in protecting the tranquility and privacy of the home and protecting citizens from the detrimental effect of targeted picketing.” It cites the Supreme Court precedent of Frisby v. Schultz (1988), which upheld a city ordinance prohibiting picketing in front of and around personal residences.

“Sending unruly mobs to private residences, like we have seen with the angry crowds in front of the homes of Supreme Court justices, is inappropriate,” DeSantis said in a statement. “This bill will provide protection to those living in residential communities, and I am glad to sign it into law.”

The law, originally introduced in the Florida House of Representatives in January, contributes to the national conversation surrounding protests outside the private residences of Supreme Court justices after the May 2 leak of the draft majority opinion in the abortion-related case Dobbs v. Jackson Women’s Health Organization.

HB 1571 passed the Florida House with a vote of 76-41 in early March and the state Senate five days later with broader bipartisan support and a vote of 28-3.

The state of Florida has seen its fair share of protests since the 2020 Black Lives Matter riots and more recently over the “Parental Rights in Education” bill DeSantis signed into law on March 28. Opponents dubbed it the “Don’t Say Gay” bill, even though the word “gay” is nowhere to be found in the legislation.

DeSantis previously sought to mitigate violent protests last year by supporting and signing HB 1, which charged violent protesters with various degrees of misdemeanors and felonies for injury caused to other persons or property.

Opponents sought and won an injunction suspending enforcement of the anti-riot law from a federal judge in September, but Florida is appealing the ruling.