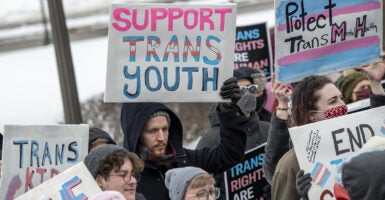 The radical left wants puberty to be optional, as promoted in a book from the American Academy of Pediatrics. Pictured: Minnesotans rally March 6 at the capitol to support transgender children in St. Paul, Minnesota.(Photo: Michael Siluk/UCG/Universal Images Group/Getty Images)

The radical left continues to target vulnerable children with its twisted view of gender identity and sexual orientation. Now, the left has the full-fledged support of the country’s largest association of pediatric doctors.

“You-ology: A Puberty Guide for EVERY Body” is a book released by the American Academy of Pediatrics aiming “to talk about puberty in an inclusive way.”

Although there are chapters on the normal growing pains associated with puberty, the book raises eyebrows by including content related to kids identifying as transgender, as well as the academy’s recommendations for those kids.

“You-ology” uses short stories to highlight certain points. In Chapter 3, a group of boys in a boys’ locker room notices a biological female is there with them. They question why and are then accosted by the girl’s brother, who informs them that she is transgender.

The chapter goes on to argue that sex isn’t related to what genitals a baby has, and that it’s all about how someone identifies. Worse, the book goes on to describe how there aren’t two genders, but a whole multitude.

“You-ology” revels in these sex nonspecific phrases, much like the omnipresent expression “birthing person,” with which the modern left is obsessed.

In one section, the book advises readers against using the term “feminine hygiene” products to refer to items such as tampons or menstrual pads, and instead to use the term “period products.”

Even then, sometimes the book’s authors get confused and forget their woke biology, claiming that “male” bodies produce sperm instead of leftists’ accepted position that men aren’t unique in doing that anymore.

Later chapters recommend that kids who are uncomfortable with their bodies should wear binders or “tuck” their genitals. The book claims in some cases, medical intervention, including puberty blockers, is necessary.

The left attempts to hide what it’s doing behind cutesy illustrations, but the reality is clear. Activist doctors who want to normalize gender ideology are foisting transgenderism on children.

The consequences of this attempt to normalize the left’s radical agenda can be fatal.

The Daily Signal reported the story of Yaeli Martinez, a 19-year-old girl who committed suicide after battling with depression, which she thought becoming transgender could solve.

It’s not hard to imagine someone like Yaeli being exposed to this type of book and thinking that the solution to all his or her problems is to take puberty blockers, bind their breasts, and transition.

That’s a dangerous lie that results in miserable kids and, in the worst case, broken families weeping over the bodies of their loved ones.

Books such as “You-ology” exacerbate the issue not only by solidifying transgender ideology into the mainstream, but by convincing kids that it is perfectly normal to change their bodies, often permanently, during a period of extreme emotional instability.

Of course, kids are going to be confused about who they are during puberty. Their bodies are being shot full of new hormones, and they’re going through something completely unprecedented in their young lives.

That is biological reality, and no amount of posturing by woke activist doctors will change that fact.

The American Academy of Pediatrics should be ashamed to be producing material that is directly responsible for ruining the lives of children.