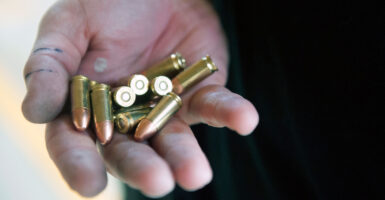 The U.N. wants manufacturers of ammo to number their bullets. Then, the U.N. wants to track where and to whom every bullet in the world is sold or sent. (Photo: Jason Connolly/AFP/ Getty Images)

More than two decades ago, the United Nations created a program to curb the trafficking of small arms. It’s done nothing but fire blanks. So now, the U.N. wants to control bullets.

In 2001, the United Nations started the Programme of Action to Prevent, Combat, and Eradicate the Illicit Trade in Small Arms and Light Weapons in All Its Aspects. Its next meeting will be held in New York from June 27 to July 1.

The Programme isn’t a treaty. It’s a political gathering that’s meant to encourage voluntary cooperation. It meets every other year to produce an outcome document that’s politically (but not legally) binding.

The Programme has achieved very little, if anything. That’s not just my view. The U.N. secretary-general said so in 2008. New Zealand said so in 2012. Its supporters said it was “firing blanks” in 2014. In 2018, the Red Cross said that governments in the Programme talk a lot, but do nothing.

In practice, that suits most of the U.N. fine: All the nations get credit for participating in the Programme while actually doing nothing, while the Programme focuses on peripheral issues, such as 3D-printed guns.

This year, the rumor is that the Programme’s president wants it to focus on banning toy guns. (No more water pistols for your kids, says the U.N.)

If the nations in the Programme genuinely wanted to help control the illicit trade in small arms, it could in theory be modestly useful.

For example, it could seek to eliminate the “Chinese exemption,” under which Beijing is exempt from the requirement to put serial numbers on its firearms, which makes Chinese guns difficult to trace.

But instead, the Programme focuses on irrelevant distractions—and on breaking its own promises.

In 2018, the Programme broke its rule of unanimity to approve an outcome document that added ammo over U.S. protests. The Programme wasn’t supposed to include ammunition. And adding it serves no useful purpose.

The idea of putting numbers on, and trying to trace, individual rounds of ammunition is nonsensical. The resulting database would have trillions of entries.

Most of the Programme’s member nations can’t and don’t even meet their existing commitments. But that didn’t stop the United Nations from adding ammo.

The U.S. does most of the work of running traces on firearms, providing expertise, and giving aid to upgrade foreign recordkeeping through the Programme.

But if the U.S. is going to do most of the work and simultaneously going to have the Programme’s rules broken against it, there’s no reason for us to continue to participate in it.

There are now more good reasons than ever to quit. When the Programme voted to include ammo in 2018, it lined itself up with a U.N. working group. That group’s report came out late last year, and it’s a bureaucrat’s fantasy.

It calls for the negotiation of “a set of political commitments” to “concentrate on through-life ammunition management.” In other words, an entirely new Programme of Action, focused just on ammo.

“Through-life” ammo management may sound innocuous, but isn’t. Here’s what it means, in the U.N.’s own words:

States would reduce security risks by encouraging ammunition producers, where feasible, practicable and consistent with national legislation, to maintain effective accounting and record-keeping systems that permit the retrieval (by serial, batch, or lot number) of detailed sales and transfer records. Ideally, such records should be digital, easily retrievable, and held for as long as feasible.

Does the mention of “consistent with national legislation” give the U.S. an out? Not really, because the goal of the Programme is to commit nations to changing their laws—to get them to invent new crimes.

And if the U.S. changed its laws, then what the Programme wants would suddenly be “consistent with national legislation.”

The U.N.’s plan would be a massive invasion of privacy. It would set the stage for governments to surveil gun owners. It would result in the criminalization of everything related to the sale or transfer of ammo.

And it would never work.

In theory, the Programme of Action is supposed to focus on the illicit arms trade. But as the U.S. has repeatedly pointed out, many nations don’t even live up to their commitment to put serial numbers on imported firearms so they can be traced.

So, now all those nations are going to number bullets?

The defenders of this idea say that bullets make guns work. But it’s just as true that guns make bullets work. And it’s a lot easier to trace guns than bullets.

The U.S. participated in the U.N. group that developed this foolish report. But we have no idea what it said inside the group. All we know is that the U.N. is at it again—presumably, with U.S. backing.

This is what we get for taking the U.N. seriously when it comes to guns.

The Programme of Action doesn’t work. Everyone concedes that it doesn’t work, and there’s no likelihood that it ever will work. The U.S.’ participation simply gives it a credibility it doesn’t deserve.

If the Programme were harmless, that might not be so bad. But it has lots of silly ideas of its own, and it’s a barrier to useful action—like getting numbers on Chinese guns.

It’s time for the U.S. to quit the Programme of Action. And while we’re at it, we should quit the U.N. ammo group and make it clear that, no matter what the U.N. does about bullets, we won’t try to apply its foolish ideas here.