There’s a Cold War Brewing Between Biden and Everyday Americans 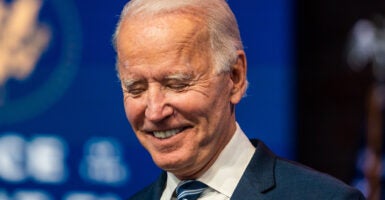 Last June, the Biden administration unveiled its National Strategy for Countering Domestic Terrorism. Despite its anodyne-sounding name, the national strategy was anything but anodyne.

The pamphlet represented the logical culmination of the left’s cynical use of the Jan. 6, 2021, U.S. Capitol riot as a means of ginning up large-scale, nationwide anti-Republican/anti-Trump voter sentiment.

The result, evinced again by Attorney General Merrick Garland’s disgraceful October 2021 memo directing the FBI to intrude on local school board meetings and crack down on anti-critical race theory parental revolts, has been a roiling cold war waged by the ruling class against us “deplorables” and our political “wrong think.”

Now, seven months after Garland’s infamous Oct. 4 memo, the better question to ask is not whether President Joe Biden is engaged in a cold war merely against the “deplorables.” We know the answer to that: yes. Instead, the more relevant question is whether the Biden administration is now engaged in a cold war against a broader target: the entire American citizenry. The answer to that question, based on all relevant data and metrics, seems to be the same: yes.

Most obvious and perhaps most important, inflation—which the Federal Reserve finally recently conceded is not “transitory” but here to stay for a while—is now the highest it has been in four decades. The consumer price index increased 8.3% in April on an annualized basis—slightly lower than March’s 8.5% clip, but still painfully above the Fed’s 2% target.

Biden has recently declared fighting inflation to be his top domestic priority, but he shows no appetite for curbing the mass inflationary deficit spending that has characterized his presidency. Nor has Biden communicated to Fed Chair Jerome Powell that he is prepared to accommodate the drastic interest rate hikes that are now necessary to bring inflation back under control.

Biden is also looking to “fight” inflation—a de facto regressive tax that eats away everyone’s savings, but hits lower- and middle-class earners the hardest—in all the wrong places.

The traditional economic definition of inflation is too much money chasing too few goods, but Democrats seem wholly uninterested in working with Republicans on the sort of industrial policy measures needed to immediately revamp domestic production. On the contrary, Biden’s priorities are completely backward.

Amidst unprecedented—and potentially lethal—shortages in baby formula, he has not acted swiftly to either invoke the Defense Production Act to ramp up domestic production (after his own Food and Drug Administration shut down a baby formula production facility) or temporarily lift the import tariffs that have helped cartelize the domestic baby formula market.

At the same time, Biden has openly mused about ending the Trump administration’s signature tariffs on China. But all that would accomplish is make the median American consumer even more dependent on our geopolitical archfoe.

Fed-driven monetary policy aside, the way to fight inflation on the fiscal side is to accelerate production—not to fortify China’s cheap-labor sword of Damocles that dangles over the American economy.

Perhaps most revealing, as reported by the Washington Examiner, Rep. Kat Cammack, R-Fla., tweeted photos appearing to show “[s]helves and pallets packed with baby formula” at holding facilities for illegal aliens. This, of course, while actual U.S. citizen parents are frantically scrambling from store to store to ensure their babies don’t starve.

But it’s not just the open-borders/pro-illegal alien lobby that plays our ruling class like a fiddle; it’s also the zealots in the environmentalist movement.

During the same week that nearly 30 states are reporting all-time highs for average gas price at the pump, the Biden administration has canceled offshore oil and natural gas leases in both Alaska and the Gulf of Mexico. But Biden has simultaneously admitted that energy accounts for a whopping 60% of the inflation Americans are now experiencing. Higher fuel prices for trucks and tractors, after all, trickle down and affect all goods and foodstuffs farmed and shipped.

Amidst this carnage to Americans’ savings and retirement accounts, it is unfathomable for the administration to further restrict domestic energy production. The only effect of such restrictions, intended to appease the greenie and Malthusian radicals who increasingly dominate the Democratic donor base, is to make Americans even more energy-dependent on such human rights bastions as Venezuela and Saudi Arabia.

Our ruling class, full of virtue-signaling electric car owners, no doubt sleeps well at night as normal gasoline-dependent Americans get annihilated at the pump.

Meanwhile, Congress is racing to pass an emergency $40 billion appropriation in aid to Ukraine, a faraway land now roiling in its fourth calendar month of a crippling humanitarian crisis but hardly a pressing domestic concern.

Post-Maidan Revolution Ukraine is a well-known playground for venal slush funds and parochial nongovernmental organization interests, but that apparently did not give the U.S. House any pause in reviewing the legislation to minimize any gratuitous pork; it rapidly passed Congress’ lower chamber by a lopsided tally of 368-57.

The situation in Ukraine is tragic—but so is the situation at the porous U.S.-Mexico border, which has been completely overrun in recent months by transnational drug cartel-trafficked illegal migrants.

Those migrants and cartels are incentivized to make and orchestrate the hazardous journey north due to the Biden administration’s various amnesty magnets, such as its return of the Obama-era “catch and release” policy for illegal aliens in the U.S. interior.

Translation: Ukraine’s border with Russia matters more than America’s own border with Mexico.

It is difficult to recall the last time a U.S. president persistently acted in a manner so contrary to the interests of the median citizen to whom that president purportedly takes a constitutional oath to protect and defend. Fortunately, Biden’s historically low approval ratings hint at a ballot box remedy for our national woes: A red wave beckons this fall.