Navy ‘Eases the Rudder’ With Its Recommended Readings 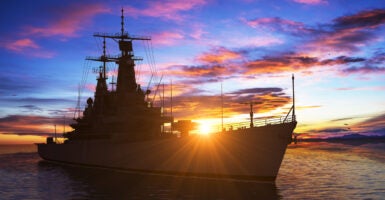 “Easing the rudder” for a seaman means to slowly stop the turn of a ship. By removing these books, Adm. Mike Gilday has slowed the turn of the Navy toward divisive social theories.

Why does a reading list matter? Gilday’s Professional Reading Program is more than a reading list for aspiring young officers and sailors—it is a window into senior leadership’s values and signals what junior officers need to embrace and understand to succeed. That is why last year’s list drew so much attention and rightful ridicule from many in the Navy, veterans, and members of Congress alike—myself included.

As such, this change should be viewed as a small victory for the Navy. But the battle to maintain a professional navy is far from over and threats both overt and insidious remain.

Still worrying is the secretary of defense’s unrelenting hunt for extremists in the ranks, despite an inconvenient lack of evidence. Careers have been sidelined and livelihoods destroyed on insinuation, rumors, and pure power-seeking by over-zealous or sheepish leaders.

Notable in this regard was the 2019 public humiliation of the admiral running the Naval War College amidst unsubstantiated accusations of inappropriate behavior, followed by his 2021 exoneration. It has been called by some senior naval leaders familiar with the investigation a “weaponization of the process.”

The danger is greater still when added to a culture of “zero tolerance” that too quickly destroys talented risk takers at the cost of developing warfighters the nation needs. Rather than develop and mature future naval leaders, it has been far easier and safer to an aspiring senior naval leader to discard expendable juniors.

Last year, members of Congress rightfully grilled the secretary of defense, chairman of the Joint Chiefs of Staff, and the chief of naval operations on their fixation on a nonexistent extremists epidemic and politically charged reading lists. However, the issue is more pernicious than a reading list, and will require Congress not relenting in driving such divisive thinking out of the military.

On this, the letters of Rep. Doug Lamborn, R-Colo., and Rep. Vicky Hartzler, R-Mo., demanding the chief of naval operations remove “How to be an Antiracist,” “The New Jim Crow,” and “Sexual Minorities and Politics,” and assure they are not being used at any Navy institutions.

The whistleblower campaign of Sen. Tom Cotton, R-Ark., and Rep. Dan Crenshaw, R-Texas, has also been helpful in exposing how far divisive ideologies have permeated the military. To be clear, the Navy has not given an accounting as requested by the representatives, and the work of Cotton and Crenshaw is far from over.

Congress must persist in rooting out divisive teachings at military education institutions, unearth investigations of questionable merit, and hold accountable poor performing current and past senior leadership who delivered an ever-shrinking fleet serviced by ever-dilapidated shipyards. A pernicious side effect of all this is an erosion of those willing to serve in the nation’s defense and noted in abysmal recruitment.

Last year’s inclusion of “social warrior” into the Navy’s repertoire occurred while Russian President Vladimir Putin prepared his invasion of Ukraine and China exercised its military against Taiwan. The nation cannot afford more of these distractions. The costs are more than micro-aggressions but rather real violence on a global scale.