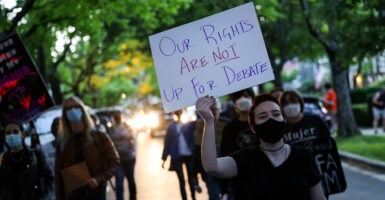 Many Democrats have responded to the leaked Supreme Court draft opinion by threatening justices at their private homes. Pictured: Protesters gather outside the home of Justice Brett Kavanaugh May 11 in Chevy Chase, Maryland. (Photo: Kevin Dietsch/Getty Images)

After angry public reaction to the leaked Supreme Court Justice Samuel Alito draft opinion on reversing Roe v. Wade, Justice Clarence Thomas said: “We are becoming addicted to wanting particular outcomes, not living with the outcomes we don’t like. We can’t be an institution that can be bullied into giving you just the outcomes you want. The events from earlier this week are a symptom of that.”

The kind of events to which Thomas referred include pro-abortion activists blocking church entrances and protesting at the homes of Chief Justice John Roberts and Justices Brett Kavanaugh and Alito.

It is difficult to determine when this generation of Americans on the left decided to attack rather than persuade those who disagree. But an inflection point occurred when, for the first time in history, the Senate rejected a Supreme Court nominee, not because of ethics or lack of character, but because Democrats opposed his judicial philosophy.

President Ronald Reagan nominated to U.S. Court of Appeals for the District of Columbia Justice Robert Bork, who represented—to Democrats like Sen. Ted Kennedy—a threat to move the Supreme Court to the right on issues like abortion and affirmative action.

Kennedy viciously attacked. On the Senate floor, Kennedy described “Robert Bork’s America” as “a land in which women would be forced into back alley abortions, blacks would sit at segregated lunch counters, rogue police could break down citizens’ doors in midnight raids, schoolchildren could not be taught about evolution, writers and artists could be censored at the whim of the government, and the doors of the federal courts would be shut on the fingers of millions of citizens.”

Two years ago, at a pro-abortion rights rally in front of the Supreme Court, Sen. Chuck Schumer, D-N.Y., shouted: “I want to tell you, [Justice Neil] Gorsuch. I want to tell you, Kavanaugh. You have released the whirlwind and you will pay the price. You won’t know what hit you if you go forward with these awful decisions.”

Following this, Roberts issued a statement: “Justices know that criticism comes with the territory. But threatening statements of this sort from the highest levels of government are not only inappropriate, they are dangerous.”

Two years earlier, Rep. Maxine Waters, D-Calif., at a rally, called for the public harassment of President Donald Trump’s Cabinet members. Waters shouted: “If you see anybody from that [Trump] Cabinet in a restaurant, in a department store, at a gasoline station, you get out and you create a crowd and you push back on them, and you tell them they’re not welcome anymore, anywhere.”

President Joe Biden, who once backed an amendment to overturn Roe v. Wade, recently slammed its possible reversal: “What are the next things that are going to be attacked? Because this MAGA crowd is really the most extreme political organization that’s existed in American history—in recent American history.”

I don’t understand how one can actually have an intellectual discourse in this country if you cannot have the opportunity to read thoughtful people with whom you disagree. We’re at a moment in the country right now which I think, you know, the left should do some soul-searching too, right? … We don’t want to hear anything—we’ve long said this about this about the right … but the left as a rule does not want to hear thoughtful disagreement.

I am pro-life. I oppose abortion. I live in California, where voters opposed abortion restriction propositions for parental notification and for waiting periods. As a federalist who believes that issues like abortion are properly left to the states, I see my role as a citizen, pundit, and a person of faith to persuade, not threaten. There was a time when people on the left felt this way, too.