How Should Rhode Island Respond to the Great Barrington ‘Awokening’? 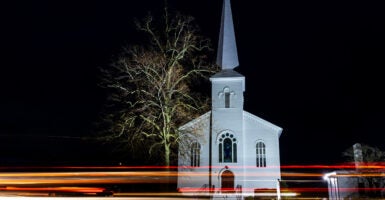 In recent years, the woke left has taken control in the affluent small town of Barrington, Rhode Island, dominating the seats of power on both the town council and the school committee, secretly and defiantly imposing its radical and divisive agenda upon its own taxpayers, veteran groups, students, and teachers.

The disdain these elected and appointed political supremacists regularly demonstrate against concerned citizens is now clearly evident for all to see. But, have they gone too far, and is their woke rule about to be put to sleep? Has the recent national and international news coverage of the town’s destructive policies further motivated parents to get involved?

This is not the first time that a “Barrington” locality has made news since the onset of the pandemic.

In the summer of 2020, when it became clear that the increasingly tyrannical and arbitrary international governmental responses to COVID-19 were not based on research or science, and were unnecessarily infringing on the liberties of people across the globe, a group of high-profile epidemiologists and public health scientists published an open letter, describing more commonsense, science-based, and effective prescriptions for dealing with the virus. The letter became known as the “Great Barrington Declaration,” named for the small Massachusetts town in which it was signed.

And now, almost two years later, a Great Barrington Awokening is underway in neighboring Rhode Island, as town residents are becoming awakened to the foolishness and danger of overly privileged and over-educated woke public officials. They are now openly rising up to retake their schools and town.

The Great Barrington Declaration was largely quashed by big-COVID-19 advocates in government and in traditional and social media circles. However, it does not look like this group of concerned parents and taxpayers leading the Great Barrington Awokening will be similarly silenced. Its principled call for change will remain a clarion call throughout the 2022 election cycle, and likely beyond.

Included in a long train of woke abuses that were detailed in their own open letter, signed by almost 500 Barrington voters—Democrats, Republicans, and independents—and published in the town newspaper, were the final straws that caused parents to awaken: a major curriculum policy change and the arbitrary firing of three valued public school teachers. All of the signers’ names are listed on the letter so that they may publicly avow their pledge to vote the town’s woke incumbents out of office.

Ironically, the fired teachers, who were guests on an April episode of my “In The Dugout” video podcast, became victims of the exact kind of nonsensical policies that the Great Barrington Declaration letter warned of, after their personal religious exemptions from the school district’s arbitrary vaccine mandate were denied by the school committee and school system. They were never notified, nor could they have ever imagined, that filing a religious exemption to the vaccine would lead to their cruel dismissal.

In recent decades, young parents flocked to Barrington, Rhode Island, in large part due to its highly regarded public school system. Now, that school system has been transformed into social-equity morass, and its ratings are steadily declining.

The public letter that signaled the onset of the Great Barrington Awokening cites numerous examples of other “self-inflicted wounds” by the town’s woke school district; most implemented secretly, without due notice, and “without regard for stakeholder input.”

This cavalier, nontransparent, and tyrannical approach toward government is wholly consistent with the left’s belief that it and only it knows better what is or isn’t in the best interests of the people it rules over.

Indeed, just days after the teachers were officially fired, their attorney filed an Open Meetings Act complaint with the Rhode Island attorney general, claiming a violation of an Oct. 14, 2021, meeting in executive session where the political supremacists on the Barrington School Committee made the decision to consider, and subsequently deny, the religious exemptions, without providing the statutorily required public notice of their intentions.

Perhaps the most glaring and offensive example cited in the open letter was the sudden elimination of honors-level English and history courses by the “equity”-obsessed school committee, believing it is unfair for high-achieving students to have access to advanced curriculum that is not available to everyone else.

This major educational policy change—“excellence” sacrificed for “equity”—was unilaterally implemented without any public debate, with no justification or stated goal, and with no input from parents or teachers.

Parents were notified after the fact and became outraged by this “debacle,” which robbed many of their own children from valuable advanced learning and achievements of note for their future college applications. The left’s “war on children” is in full gear in Barrington.

At a broader town level and outside of the school district, the Barrington Town Council has also demonstrated similar levels of woke disdain, hypocrisy, and anti-patriotism, by insulting its own local veterans group.

In August 2020, the Barrington town manager, again without any public debate, ordered that the Black Lives Matter flag be raised on very same flag pole with the United States flag, just outside of town hall at a veterans memorial. Flying political flags on the same pole as “Old Glory” is a violation of the U.S. flag code, but such issues do not matter to the social-equity-driven town council.

The local Barrington United Veterans Council public protested, with Lt. Col. Paul Dulchinos as the primary voice, and they initiated a “Keep Politics Off the Flagpole” campaign.

And it gets worse. In March 2022, in an overt act of vengeance against the veterans group that dared challenge its power, the Barrington Town Council voted to strip the Barrington United Veterans Council from running its own annual Memorial Day Parade. The veterans council had been running the parade in Barrington since its formation in 1954—rain or shine—to honor those that sacrificed for their country.

According to Dulchinos, “They passed a motion instructing the Town Manager to run the parade and then specified that their own hand-picked Master of Ceremonies be placed in charge (instead of me). Whose wife happens to be a local School Committee Member of their same political party. Although he is a Veteran, he has never been a member of our organization nor has he ever participated in any of our previous activities. This was a slap in the face for all those who have faithfully served this community from our organization over the last 68 years.”

But enough was enough. By the early 2022, parents and citizens in Barrington started organizing and rising up. In the hope of returning to some semblance of sanity for their town, the citizens and parents behind this Great Barrington Awokening have pledged to replace woke council members, either via recall petition or in the November elections.

At the time of this writing, the group had already identified six local candidates to run for public office against all woke incumbents under its “Parents United Barrington” slate: two each for the local school committee and town council, and two for the state’s General Assembly, with multiple fundraisers already in the works.

Not too long ago, Barrington was somewhat of a red island in the very blue Ocean State. After a decade or two of citizen complacency that allowed a progressive tide to roll in, there has now arisen a new energy of “awokened” citizen vigilance—as residents across the town are awakening to the illogic and divisiveness of the woke-left agenda.

It remains to be seen whether or not those behind the Great Barrington Awokening will be successful in their bid to turn the tide—and the town—back to common sense or purple. But it is almost certain that the woke agenda will no longer be allowed to be implemented, unabated, in this small Rhode Island town.