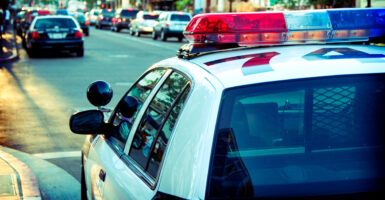 “In God We Trust” decals will be removed from Haven, Kansas, police vehicles by May 16. (Photo: McCaig/Getty Images)

Family Research Council is a nonprofit research and educational organization dedicated to articulating and advancing a family-centered philosophy of public life.

Last week, during a City Council meeting in Haven, Kansas, council members voted on removing the “In God We Trust” decals from police vehicles. Council member Sandra Williams introduced the measure by emphasizing that she did not think the police department was the proper forum to be talking about God.

After a brief discussion, Williams made a motion to remove the “In God We Trust” decals from the police vehicles, as well as delete all Bible verses from the police department’s Facebook page. Another council member seconded the motion, and it passed unanimously. Mayor Adam Wright has since announced that the decals and quotes will be removed by May 16.

Monday night on “Washington Watch,” Family Research Council President Tony Perkins addressed the controversy. “The Haven City Council has said that this was an issue of separation of church and state. But this is the nation’s motto.” Across the country, approximately 250 law enforcement offices have “In God We Trust” displayed on their vehicles.

However, during the broadcast, Perkins did interview a critic of the council’s move, Chris Powell, senior pastor of New Haven Baptist Church.

“I think it was a decision that certainly surprised a lot of people—and, quite frankly, was done very rapidly,” said Powell. “I don’t think that this decision reflects our community as a whole.”

Powell explained that in a town of 1,191 people, only 15% of the voting-age residents cast their ballots in the last election. “It’s tough to get a fair representation of how the people of a community truly feel when voting numbers are so low.”

“I think in our country, we can kind of see that when the degradation of the church and the family unit begins to happen, things like this become more prominent,” Powell expressed.

During the Civil War, Secretary of State Salmon P. Chase wrote a letter to the Rev. M.R. Watkinson declaring, “No nation can be strong except in the strength of God, or safe except in His defense. The trust of our people in God should be declared on our national coins.”

In 1864, “In God We Trust” first appeared on a 2-cent coin. The U.S. Department of Treasury reports that this decision reflected the increased emphasis on faith as a result of the conflict.

In 1956, Congress passed a bill mandating that the phrase be printed on every denomination of U.S. paper currency. President Dwight D. Eisenhower also signed into law a bill establishing “In God We Trust” as the national motto.

Powell said that following the City Council’s decision, there has been an increased interest in local elections. He anticipates that more Haven city residents will vote to ensure that City Council members represent their values.