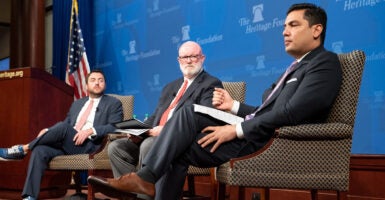 Panelists at a discussion of censorship by Big Tech agreed it was a grave threat to the American republic, but they clashed over what to do about it.

“What these platforms are doing is not right,” said Niam Yaraghi, an assistant professor of business technology at the University of Miami and a Brookings Institution senior fellow.

“I do not really like the government to come in and do anything about it because I believe that … an open market would solve the issue in the long run,” he said.

“That line of argument might have been sufficient 20 or 30 years ago, but at this point, the left controls every major cultural institution in America,” countered Newsweek opinion editor Josh Hammer.

The discussion began with an introduction by Kara Frederick, director of Heritage’s Tech Policy Center.

“Today, tech giants work together to disadvantage or destroy existing and potential competitors, undermine our First Amendment freedoms by suppressing speech they don’t like, often hand-in-glove with the U.S. government, and collude with authoritarian governments like the [Chinese Communist Party],” Frederick said.

Hammer made the case for reining in Big Tech companies, arguing that there’s legal precedent that Congress cannot protect private companies from doing the things the government can’t do by giving them extralegal powers.

Referring to Section 230 of the Communications Decency Act, which provided a liability shield for website platforms and was passed by Congress in 1996, Hammer said, “When Congress goes and provides this extralegal immunity, [tech companies] cannot censor speech that would otherwise be First Amendment-protected if it were espoused from a sidewalk. But that’s exactly what [the tech companies have] done.”

Yaraghi agreed with Hammer about what he described as “the shameless way that [Big Tech is] in cahoots with the Democratic Party.” But he said that closeness between government and Big Tech wasn’t always the case, and that it’s mostly exclusive to Democrats, and not government as a whole.

“That is a very valid argument as long as we have the Democratic Party in power,” Yaraghi said. “It was not valid when [Donald] Trump was in power. So, you could draw a very distinct line between the government and the private sector just two years ago.”

He said Section 230 was a necessary protection for Big Tech companies, and that ending it would “be the end of Big Tech in the United States.”

As platforms, social media companies are not responsible for removing content, other than blatantly illegal content such as child pornography. They cannot be sued for things that users post on their site. Publishers, on the other hand, do heavily moderate content, and are legally responsible for the content on their websites.

The panelists also discussed what impact Big Tech could have on American elections.

“The time that Hunter Biden’s [laptop] story came out, don’t ignore the fact that 51 officials of the intelligence community came out and said that there is a lot of reason to believe that this is Russian disinformation,” said Yaraghi. “You have the New York Post on one hand, and then you have former heads of the CIA, FBI, all the big guns on the other hand telling you that this is Russian disinformation.”

He added, “You want to keep the integrity of the U.S. federal elections. What would you do? Wouldn’t you censor it?”

To Hammer, Twitter’s censorship of the Hunter Biden laptop story was unacceptable and had major consequences for the results of the 2020 election.

“Big Tech, as far as I’m concerned, helped steal an election for Joe Biden,” said Hammer. “As high as 20% of people who voted for Biden said they literally would have changed their vote if the story were out.”

Hammer also cited an anecdote in which Robert Epstein, a computer scientist, testified to Congress that Google was independently able to manipulate more than 3 million votes toward Hillary Clinton in the 2016 election.

“I think the examples of [the censoring of the New York Post] and Google kind of raise those fundamental questions [about Big Tech’s impact on elections], and Congress absolutely can and should act in every way conceivable to [curtail Big Tech’s ability to impact elections],” he said.