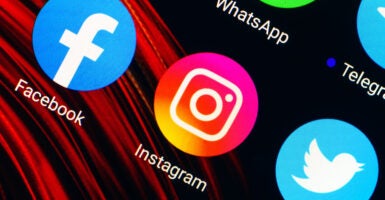 "The government and Big Tech have become basically brazen in the face of the American people, saying, 'We are going to give you the information that we deem you need,'" Louisiana Attorney General Jeff Landry tells The Daily Signal. (Photo illustration: Rafael Henrique/SOPA Images/LightRocket/ Getty Images)

The Biden administration’s formation of a “disinformation” board has sparked momentum for two states to sue the U.S. government, alleging pressure and collusion with Big Tech corporations to censor political content that challenges the government line.

“If we would’ve tried to bring this lawsuit two or three months ago, I think they would’ve laughed us out of court,” Louisiana Attorney General Jeff Landry told The Daily Signal in a phone interview about the new Disinformation Governance Board inside the Department of Homeland Security.

“People are really starting to raise their eyebrows and it’s mostly because of this disinformation branch,” Landry said. “In other words, the government and Big Tech have become basically brazen in the face of the American people, saying, ‘We are going to give you the information that we deem you need.’”

“When the government strong-arms, or basically forces, a company to do something that it would be unconstitutional for them to do, then basically what happens is that those companies then become an arm of the government,” Landry told The Daily Signal.

Among the points in the 86-page complaint, filed in U.S. District Court for the Western District of Louisiana, are:

Fauci is both the chief medical adviser to the president and the longtime director of the National Institute of Allergy and Infectious Diseases.

In addition, the lawsuit alleges action in excess of statutory authority and violations of the Administrative Procedure Act by both HHS and DHS officials.

“What’s amazing is they’ve been pretty brazen. What Psaki has done, Jen has gone out there and said it, basically, that they’ve worked with some of the Big Tech companies in order to censor the information,” Landry said, adding:

We’re going to use the public statements in order to go after the discovery of exactly what you’re looking at. I can’t wait. I cannot wait to lift the hood of that vehicle and see what’s underneath it. I can tell you, it’ll be extremely interesting. And again, the interesting part is that all of the information and the communication between the government and Big Tech is certainly a matter of, it should be a matter of, public record.

Americans regularly use social media platforms such as Facebook, YouTube, and Twitter, now ubiquitous in society, to discuss topics such as public health, Missouri’s Schmitt said in a formal statement.

“In direct contravention to the First Amendment and freedom of speech,” Schmitt said, “the Biden administration has been engaged in a pernicious campaign to both pressure social media giants to censor and suppress speech and work directly with those platforms to achieve that censorship in a misguided and Orwellian campaign against ‘misinformation.’”