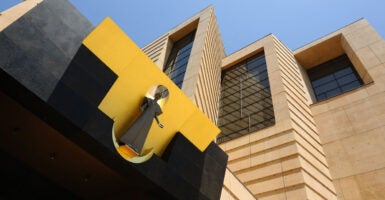 Parishioners at the Cathedral of Our Lady of the Angels in Los Angeles ushered pro-abortion protesters out of their church Sunday, thwarting their attempt to disrupt the service, according to footage posted by the Catholic News Agency.

During the church service, pro-abortion demonstrators walked between pews toward the front of the church in an apparent attempt to reach the altar before being blocked by parishioners and escorted out of the building, according to the footage shared by the Catholic News Agency.

The protest came days after a leaked draft opinion revealed the Supreme Court would likely overturn Roe v. Wade and return the power to restrict and regulate abortions to the states. The pro-abortion group Ruth Sent Us called for protesters to disrupt church services following the news and shared a video of a similar protest Tuesday.

Roughly five women wearing red gowns and large white hats attempted to walk to the front of the church as a priest guided the parishioners in prayer, according to the footage. Ushers blocked protesters from walking to the altar, and several men exited their pews to help ushers escort them out of the building.

The protesters’ costumes appeared to be a reference to “The Handmaid’s Tale,” a dystopian novel frequently used by pro-abortion activists to suggest that abortion restrictions impede women’s rights.

Marxists try to disrupt Mass at Cathedral of our Lady of the Angels. Security, ushers and parishioners said they were not having it.#cathedral #Catholic pic.twitter.com/HlN8yHxPKL

“You’re attacking me right now, you started attacking me,” one protester yelled at the usher blocking her from moving to the front of the church, according to the video.

“Respect us,” several parishioners said out of camera view in the footage.

The yelling from the protesters and the individuals escorting them out of the building drowned out the guided prayers, and people kneeling in their pews stared as the scene unfolded, according to the footage.

“You guys want respect, we want respect,” one parishioner told the protesters as he walked them out. “I promise you, I understand you completely.”

Four protesters exited the church, escorted by several parishioners, while one protester continued to move toward the altar and was blocked by about a dozen parishioners, according to the footage.

“I have a right as an American,” she screamed as she was led out of the church. “Get your hands off me,” she yelled repeatedly in the video. She continued yelling until the end of the video after she had left the camera’s view.

The Cathedral of Our Lady of the Angels did not immediately respond to the Daily Caller News Foundation’s request for comment.