EXCLUSIVE: Team Biden Prescribes Use of Singular ‘They’ in ‘Gender Inclusive’ Policy 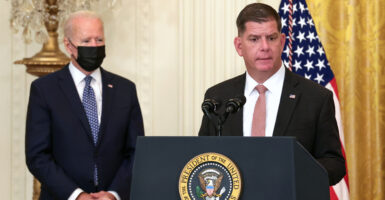 Employees of the Labor Department have been instructed to use the words “they,” “them,” and “their” to describe individuals, as part of a “Gender-Inclusive Language Policy." Pictured: Labor Secretary Marty Walsh speaks alongside President Joe Biden during a Sept. 8 event in the East Room of the White House. (Photo: Kevin Dietsch/Getty Images)

A division of the Labor Department charged with overseeing benefits for American workers is telling employees to use the words “they,” “them,” and “their” to describe individuals as part of “Gender-Inclusive Language Policy,” The Daily Signal has learned.

“The policy encourages the use of the singular ‘they’ and its variations where applicable, encourages the use of gender-neutral language, and discourages use of gender-based titles and honorifics until the preference of the person being referred to or addressed is explicitly stated,” Ali Khawar, acting assistant secretary of the Employee Benefits Security Administration, says in a memo.

The April 27 memo from Khawar, which appears to align with the wishes of LGBTQ activists, goes on to instruct division employees that when writing official documents, they should:

The Daily Signal obtained a copy of Khawar’s memo announcing the new policy, which also directs staff: “Use a gender-neutral pronoun when describing a legal rule, including in memoranda, correspondence, and regulatory drafting.”

“The White House promptly applied this order to language use, by adding Mx., a gender-neutral honorific, and ‘they/them,’ a gender-inclusive singular pronoun set to drop-down menus on its website’s contact page,” Khawar’s EBSA memo says.

Marty Walsh, a former Democratic mayor of Boston and union official, was sworn in as Biden’s labor secretary in March 2021.

The Labor Department agency “has been moving towards a practice of limiting gender-specific language,” Khawar’s memo adds:

To build on and expand that practice to be more inclusive of gender diversity, the policy allows for greater sensitivity by avoiding making assumptions based on a person’s name or appearance. This policy may be cited as the basis for using gender-inclusive language, including the singular ‘they’ in EBSA documents.

Khawar’s memo goes on to direct employees how to write documents under the new policy.

“Always use the singular ‘they’ to refer to someone if they use that personal pronoun,” his memo says. “This practice respects and affirms people and their identities.”

The memo then gives an example:

Alex’s pronouns are they/them/theirs, thus a sentence is ‘Alex is an excellent multitasker; they took notes on their computer while also answering my texts. They are a hard worker, and I enjoy working with them.’

Under the new policy, the memo also advises agency employees:

If you do not know someone’s pronouns, it is appropriate to respectfully ask. Additionally, you may introduce yourself with your pronouns and share your pronouns in your email signature. These practices invite others to share their pronouns.

In another example on subject-verb agreement, Khawar’s memo instructs employees to use a plural verb for “they.” The example reads: “Jordan is out today. They are on approved leave.”

The Daily Signal sought comment from several Labor Department spokespersons, providing an electronic copy of Khawar’s memo. A spokesperson had not responded by publication time.

Although the practice seems unusual in common language, the memo contends, use of a singular “they” dates to the 14th century:

The practice of using the singular ‘they’ reflects English usage dating to the 14th century CE. It has been recognized as grammatically correct in many dictionaries and writing style guides, including the Rules of the House of Representatives for the One Hundred Seventeenth Congress, Merriam-Webster’s Dictionary, Oxford English Dictionary, APA Style, MLA Handbook, Chicago Manual of Style, and the AMA Manual of Style.