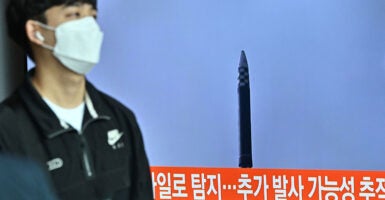 As Russia’s unjust war on Ukraine slogs on, the world keeps spinning, including unwelcome nuclear saber-rattling from a litany of U.S. foes that has reached a deeply unsettling din worth noting.

Understandably, the conflict in Ukraine is drawing a significant amount of foreign policy attention these days. Russia’s aggression against Ukraine is the largest conflict in Europe since World War II.

Unfortunately, the brandishing of bombs by North Korea, Iran, and Russia has become increasingly worrisome as nuclear and missile threats skyrocket since the Biden administration took office.

Indeed, Pyongyang has gone “ballistic,” with at least 14 missile tests already this year.

Some think that an underground nuclear test might be coming, too—the first since 2017 as well.

Addressing a military parade in Pyongyang in late April that reportedly included submarine-launched and hypersonic missiles, North Korean dictator Kim Jong Un promised to quickly expand his nuclear arsenal and expressed a willingness to use those weapons preemptively if provoked.

The Biden administration’s negotiations with the Iranian regime about its increasingly threatening nuclear and missile programs are now moving into a second year of talks. So far, the meetings aren’t going well—to say the least.

The Vienna talks about the Joint Comprehensive Plan of Action (aka the Iran nuclear deal) stalled in March. The negotiating teams from Iran, U.S., Britain, France, Germany, Russia, and China have presumably returned to their capitals.

Equally disturbing, Secretary of State Antony Blinken recently testified to Congress that Iran could have the uranium needed for a nuclear weapon—aka “breakout time”—in a few weeks if it decided to do so.

“Lengthening and strengthening” of the (deeply flawed) Iran nuclear deal that Team Biden promised seems increasingly unlikely at this point—meaning, the chance of nuclear crisis with the Iranian regime looks increasingly likely.

It’s no surprise that Moscow has been brandishing its hefty nuclear sword recently. It feels it needs to remind those supporting Ukraine of its nuclear superpower status—and the potential consequences of doing so.

For instance, this week, Russian state TV threatened to drown Britain with a “nuclear tsunami” for its support of Ukraine, claiming that its nuclear-powered, nuclear-tipped torpedo, Poseidon, could cause a tidal wave to swamp the island nation.

In addition, Moscow recently test-launched a new heavy intercontinental ballistic missile, the Sarmat. The city-busting missile is capable of carrying 20 nuclear warheads and can also be equipped with a nuclear-armed hypersonic glide vehicle.

Moreover, with its military efforts to subjugate Ukraine not going well, it’s also possible that Russia might actually use a tactical nuclear weapon to influence—or end—the war on Ukraine on its terms.

The world is an increasingly dangerous place, only made more menacing by the proliferation of nuclear technology and nuclear weapons, and dangerous threats involving their use by desperate, dictatorial regimes.

Consequently, given its record to date, the Biden administration must up its “game” diplomatically and militarily to protect American interests, considering the growing nuclear threat the U.S. and its allies are clearly facing.