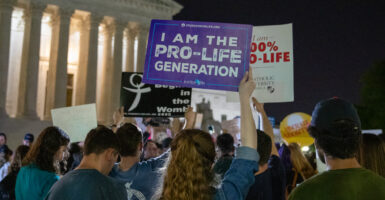 Politico leaked a draft version of a Supreme Court decision for Dobbs v. Jackson Women’s Health Organization late on May 2. Pictured: Pro-life demonstrators gather in front of the Supreme Court after news broke that Roe v. Wade is set to be overturned in Washington, D.C. (Photo: Amanda Andrade-Rhoades/For The Washington Post/Getty Images)

Politico leaked a draft version of a Supreme Court decision for Dobbs v. Jackson Women’s Health Organization late on May 2. It would uphold a Mississippi law protecting unborn children when they can feel pain—15 weeks of pregnancy—and overturn Roe v. Wade and Planned Parenthood v. Casey.

Dated Feb. 10, the draft decision is not final. Pro-life Americans are feeling more hopeful than ever that the Supreme Court may soon correct a grave error and leave Roe in the dustbin of history. But the leak is a nakedly political attempt to get the justices to back down. The court must issue its Dobbs decision without delay.

Roe v. Wade was a poorly reasoned, wrongly decided decision that legalized abortion on demand across the country in 1973. Sixty-two million lives and half a century later, it has poisoned our laws, our courts, and our country.

But a new day might soon be dawning. Here’s what you need to know about the shifting policy landscape on abortion and what to watch for in the days and weeks to come.

To set the stage for discussions about the leaked draft and the fallout, here are some key facts to keep in mind.

The United States is an outlier when it comes to abortion policy, thanks to Roe. We’re one of only a handful of countries that allows elective late-term abortion—in the company of human rights violators like China and North Korea.

Despite charges to the contrary, the law at issue in the Dobbs case, which protects unborn children after 15 weeks gestation, isn’t remotely extreme compared to the rest of the world. In fact, 47 out of 50 European countries restrict elective abortion before 15 weeks of pregnancy.

Take polls purporting to show strong support for Roe v. Wade with a grain of salt. Most Americans don’t realize that a) Roe permits abortion at any time and b) overturning Roe doesn’t prohibit abortion overnight, but returns the issue to the American people.

Overturning Roe has never been the final goal of the pro-life movement. When that day comes, hopefully soon, the next phase of work—especially in state legislatures—will begin in earnest. Freed from the shadow of Roe, policymakers can protect many more women and unborn children from an abortion industry that profits from their deaths.

Leaking the draft opinion was a shameless act of intimidation, coercion, and destruction. It was clearly meant to try to get one or more justices to change their mind. But the left won’t stop there.

Already, activists—and senators—are calling for the Senate to eliminate the filibuster, which is the Senate’s rule for extended debate. In the Senate, a 60-vote threshold is required to end debate on a piece of legislation. Doing away with this proud tradition of extended debate—which in previous years has been praised by some of the very members who today want to end it—would mean the Senate could pass radical pro-abortion legislation by a simple majority vote.

Many of the left are happy to change rules and norms when it doesn’t suit them or frustrates efforts to impose a deeply unpopular policy. Thus, they’re renewing their calls to “pack” the courts. Under this scheme, Congress would create new judicial vacancies so that President Joe Biden could nominate activist judges.

The goal, of course, would be for activist judges, once approved by the Senate, to impose the left’s abortion policies. Such a scheme of course amounts to a “hostile takeover of the judiciary.” It would politicize the courts and undermine the fundamental principle of separation of powers.

The left is also renewing its attempts to “codify” Roe v. Wade. What it really means is legislation like the so-called Women’s Health Protection Act. This act is far more radical than Roe, which itself permits abortion for any reason throughout pregnancy.

Beyond Congress, abortion advocates are turning to the Biden White House. They’re urging the Food and Drug Administration to argue that its regulations permitting telemedicine abortion preempt state laws to the contrary. This would mean that abortion providers would be able to circumvent laws in over a dozen states that prohibit telemedicine abortion.

They’re also calling for the federal government to lease land to abortion clinics. This could mean that an abortion clinic could operate on federal land even within a pro-life state.

Our laws should reflect the simple truth that every life, from the moment of conception, has inherent dignity and should be protected.

For too long, Roe has been a barrier to enacting laws that protect women and unborn children from the brutality of abortion. The Supreme Court justices in the majority must refuse to cower to the left’s appalling tactics of intimidation. They should issue their opinion without delay, allowing a new day to dawn in our country.

States can then revive old laws. These include unenforced pre-Roe statutes, conditional laws in the event Roe is overturned, and laws like “heartbeat” bills that had been blocked by lower courts. They can also enact new laws that protect the youngest and most vulnerable.

Congress, for its part, must use all its constitutional authority to protect innocent unborn children in states that refuse to protect them from abortion after their heartbeats can be detected. It must continue the work to protect babies who survive abortions, to stop the interstate flow of abortion drugs, and to stop taxpayer dollars from funding the abortion industry.

Congress must also ensure that nobody is forced to violate his or her moral or religious convictions by participating in abortion.

Finally, policymakers at all levels of government must commit to the central goal of the pro-life cause: to see the day when every person, from the moment of conception, is protected in law and welcomed in life.