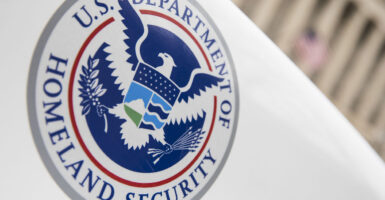 Homeland Security Secretary Alejandro Mayorkas announced the formation of a “Disinformation Governance Board” April 27, which will be led by Nina Jankowicz. Pictured: The Department of Homeland Security logo is seen on a law enforcement vehicle in Washington, D.C., March 7, 2017. (Photo: Samuel Corum/Anadolu Agency/Getty Images)

The woman tapped to head the Biden administration’s new “disinformation” board attached to the Department of Homeland Security has a history of peddling misinformation, extensive experience working with liberal organizations, and appears to have been the lead singer for a Harry Potter-themed band, a Daily Caller News Foundation investigation has found.

Conservative critics of the board warned it posed a threat to Americans’ First Amendment rights. However, Mayorkas said Sunday that the board will not monitor American citizens and emphasized that Jankowicz is “eminently qualified” to lead it.

Cat’s out of the bag: here’s what I’ve been up to the past two months, and why I’ve been a bit quiet on here.

Honored to be serving in the Biden Administration @DHSgov and helping shape our counter-disinformation efforts. https://t.co/uN20vl7qqV pic.twitter.com/JEn4FqLdck

Jankowicz became a global fellow for the Wilson Center in 2017 and a “disinformation fellow” in 2019, according to her LinkedIn profile. At the Wilson Center, she focused on projects like “Malign Creativity: How Gender, Sex, and Lies are Weaponized Against Women Online.” In 2016 and 2017, she advised the Ukrainian government on “disinformation” and communications as part of her Fulbright-Clinton Public Policy fellowship, according to her website.

Prior to that, Jankowicz worked for the National Democratic Institute, a liberal nonprofit that monitors speech online, where she oversaw programs related to Russia and Belarus, according to her website.

In 2021, Jankowicz founded Sophias Strategies LLC, a firm doing research and policy advising, and, in 2022, she began as a senior adviser for the Centre for Information Resilience, a U.K.-based nonprofit purporting to combat “disinformation” and harmful behavior toward women and minorities online, according to her LinkedIn profile.

“It is an important step in the denormalization of women’s treatment online,” Jankowicz wrote in “How to Be a Woman Online” regarding women reporting alleged “abuse” on social media.

“To be a woman online is an inherently dangerous act,” she wrote in another part of the book.

Some of Jankowicz’s past statements have recently come under scrutiny, with many accusing her of peddling false information, such as widely dismissing the validity of the Hunter Biden laptop story by reportedly calling it a “Trump campaign product.”

Back on the “laptop from hell,” apparently- Biden notes 50 former natsec officials and 5 former CIA heads that believe the laptop is a Russian influence op.

Jankowicz never admitted that the laptop story was not a product of Russian scheming, and none of the intelligence experts have recanted their statements. (Editor’s note: Jankowicz tweetd last week, “For those who believe this tweet is a key to all my views, it is simply a direct quote from both candidates during the final presidential debate. If you look at my timeline, you will see I was livetweeting that evening.”)

For those who believe this tweet is a key to all my views, it is simply a direct quote from both candidates during the final presidential debate. If you look at my timeline, you will see I was livetweeting that evening. https://t.co/nI7ZgBtTLC https://t.co/4DjBl9bzt0

She also dismissed the theory that COVID-19 leaked from a lab in Wuhan, China, calling it a tool of former President Donald Trump and his supporters.

“It becomes more politically convenient for Trump and his administration the further we get into this maelstrom, especially in comparison to the Chinese response,” Jankowicz told BuzzFeed News in 2020 in reference to the lab leak theory.

Jankowicz has also signaled her opposition to free speech on digital platforms.

“I shudder to think about if free speech absolutists were taking over platforms, what that would look like for the marginalized communities…which are already shouldering…disproportionate amounts of this abuse,” Jankowicz wrote in a tweet on April 25 regarding Elon Musk’s recent purchase of Twitter.

Last week I told @NPRMichel: I shudder to think about if free speech absolutists were taking over more platforms, what that would look like for the marginalized communities…which are already shouldering…disproportionate amounts of this abuse.” https://t.co/GLqMwC3iYH

However, Jankowicz said in 2020 that she was against the idea of governments targeting “fake news” when referring to the Trump administration during a congressional hearing.

The White House has signaled it stands by Jankowicz in her new role.

“We know that there has been a range of disinfo out there about a range of topics. I mean, including COVID, for example, and also elections and eligibility,” White House press secretary Jen Psaki told reporters on April 28.

“I don’t have any comment on the laptop, but what I can tell you is that it sounds like the objective of the board is to prevent disinformation and misinformation from traveling around the country in a range of communities. I’m not sure who opposes that effort and I don’t know who this individual is, so I have no comment on it specifically,” Psaki said, adding that she didn’t have any information about Jankowicz and could check for more information on the new board.

The next day, Psaki said that Jankowicz is an “expert on online disinformation” and was “formerly a disinformation fellow at the Wilson Center,” as well as an adviser to the Ukrainian foreign minister, among other roles.

“This is a person with extensive qualifications,” she added.

Outside of her professional life, Jankowicz appears to have been member of the “wizard rock” band called The Moaning Myrtles—named after a character in the “Harry Potter” book series. One of the group’s songs includes the phrase “nevertheless, I persisted”—a nod to Sen. Elizabeth Warren, D-Mass.

The adrenaline rush of an adoring crowd comes second only to discovering that a Biden can’t draw a clock meme got 4 retweets in Tskhinvali. pic.twitter.com/5JJM0sJitK

But her music performances don’t stop there. Jankowicz has also taken to TikTok to sing about the supposed dangers of unchecked disinformation.

In another live performance, she appears to sing about “f—ing” her way to power.