‘You Can’t Get a Tattoo If You’re 12’: DeSantis Supports Ban on Child Sex-Change Operations 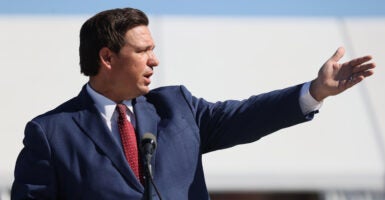 Florida Gov. Ron DeSantis, seen here speaking at Hard Rock Stadium on Jan. 6, 2021, in Miami Gardens, Florida, says it's unhealthy to let children permanently alter their bodies through operations such as mastectomies and castration and that he would support outlawing it in his state. (Photo: Joe Raedle/Getty Images)

Florida Gov. Ron DeSantis said he would support banning child sex-change operations in Florida in a Monday podcast interview on “The Truth With Lisa Boothe.”

DeSantis, a Republican, said it was unhealthy to let children permanently alter their bodies through operations such as mastectomies and castration, and that there appeared to be an organized effort to push children into these extreme forms of medical intervention. He said he would support a bill banning those procedures for children.

“Yeah, I would ban the sex change—the operations,” DeSantis told Boothe. “I think that it’s something that you can’t get a tattoo if you’re 12 years old. When they say ‘gender-affirming care,’ what they mean a lot of times is you are really, you’re castrating a young boy, you’re sterilizing a young girl, you’re doing mastectomies for these very young girls.”

“It seems like there’s a concerted effort in society to push these kids into do some type of medical intervention, and in our judgement, that’s not healthy,” he added.

DeSantis also pointed out that the majority of young people with gender dysphoria naturally grow out of it by the time they reach adulthood, making permanent operations inappropriate.

“For these young kids, 80% of the cases resolve themselves as they grow up. And so you’re doing things that are permanently altering them, and then they’re not going to be able to reverse that,” he said. “I don’t think it’s appropriate for kids at all.”

DeSantis signed legislation March 28 banning classroom instruction on gender identity and sexual orientation in kindergarten through third grade. He defended the new law in a public feud with the Disney Co., which ended with the company losing its special self-governing district and stepping back from politics.

DeSantis has also fought against transgender ideology in athletics, banning males from women’s sports in 2021 and declaring Emma Weyant, a Floridian, the true winner of the women’s NCAA 500-yard freestyle race March 22 after she lost to transgender athlete Lia Thomas.