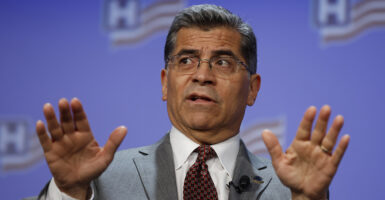 Health and Human Services Secretary Xavier Becerra—seen here participating in a session of the American Hospital Association's annual membership meeting Monday in Washington—challenged a congressman Wednesday "to show me where in our policies we call anything we’re doing ‘anti-racism’ policies." (Photo: Chip Somodevilla/Getty Images)

Health and Human Services Secretary Xavier Becerra, testifying Wednesday before a House Energy and Commerce Committee panel, claimed his agency doesn’t have any policies explicitly “anti-racist” in nature, but the health policy group Do No Harm contends Becerra is either lying or uninformed.

Do No Harm, launched April 19, bills itself as a nonprofit dedicated to protecting patients and physicians from woke health care.

Becerra made the claims in his answer to a question from Health Subcommittee member Rep. Gary Palmer, R-Ala., who had asked Becerra about a recently enacted Health and Human Services rule that provides a financial incentive for doctors to create and implement so-called “anti-racist” policies.

Palmer asked what that rule would entail and expressed his concerns that it might reduce confidence that minority patients would have for doctors who weren’t the same race as they are, and among white patients, who might feel they were the subject of discrimination.

Becerra responded that the rule Palmer described didn’t exist and blamed “misinformation” for the confusion.

“I would challenge you to show me where in our policies we call anything we’re doing ‘anti-racism’ policies,” said Becerra. “We’re simply trying to make sure everyone has equal access to health care.”

In response, Do No Harm tweeted an image of a table titled “New Improvement Activities for the CY 2022 Performance Period/2024 MIPS Payment Year and Future Years” from a 2022 Health and Human Services fiscal planning document.

MIPS stands for Merit-Based Incentive Payment System and is a program that determines Medicare payment adjustments to doctors and clinics.

The table details efforts to “create and implement an anti-racist plan using the [Centers for Medicare and Medicaid Services] Disparities Impact Statement or other anti-racism planning tools.”

Health and Human Services says the plan “should include a clinic-wide review of existing tools and policies, such as value statements or clinical practice guidelines, to ensure that they include and are aligned with a commitment to anti-racism and an understanding of race as a political and social construct, not a physiological one.”

The document added: “We also proposed making this activity high-weighted, because MIPS eligible clinicians will need considerable time and resources to develop a thorough anti-racism plan that is informed by data, and to implement it throughout the practice or system.”

In a statement posted on Twitter, Do No Harm Chairman Dr. Stanley Goldfarb said:

Secretary Becerra should level with the public about what his agency is doing. If he thinks paying doctors more as a reward for compliance with woke policies is a good idea, he should say so.

And if he was unaware that this is what his agency is doing, he needs to withdraw the policy immediately. The only misinformation we heard today came from Secretary Becerra.

Moffit noted that Section 1801 of the Social Security Act protects medical practices from political interference. Additionally, Moffit points to the Medicare Access and CHIP Reauthorization Act of 2015, the program that created MIPS.

He claims that the legislation had strong bipartisan support and would have had far more pushback if “anti-racist” programs were authorized under it, owing to concerns such as those expressed by Palmer.