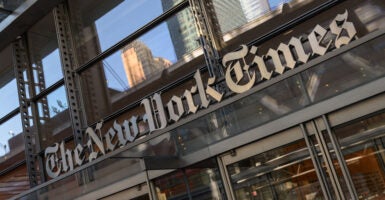 The New York Times is recruiting a reporter "to inhabit corners of the internet that popularize far-right or extremist ideas, providing our readers with a critical listening post on those ideas before they achieve wider circulation." (Photo: Angela Weiss/AFP/Getty Images)

Back in the old days, newspapers assigned reporters to beats such as Congress, the Supreme Court, the Pentagon, and the Department of Health and Human Services. Now, it seems like the new beats are about covering threats, foreign and domestic—ideological threats. So, The New York Times has a “climate” department.

Michael Bender was recently hired to report on “Trumpism,” and the Times is seeking a political reporter on “right-wing media.” In its job notice on LinkedIn, the Times warned about “the right-wing media ecosystem that now serves many conservative Americans who no longer rely on the mainstream media to inform themselves.”

The newspaper that endorsed Sen. Elizabeth Warren for president defines itself as the “mainstream media.”

The job notice continued: “The ideal candidate is resourceful, persuasive and prepared to inhabit corners of the internet that popularize far-right or extremist ideas, providing our readers with a critical listening post on those ideas before they achieve wider circulation.”

So, the beat is “far-right or extremist ideas” with the idea of … stopping the spread.

“Successful experience covering right-wing media, disinformation, or political extremism would be ideal,” it added, “and a robust list of reporting targets would be highly attractive.”

You could claim to be all about the facts if we’re talking about QAnon’s satanist pizza parlor conspiracies or “Trump won in a landslide” arguments. But the Times is worrying out loud about half the country that “no longer rely on the mainstream media.” So, it’s far broader than that. Beware, conservatives: The Times may put you on a “robust list of reporting targets.”

This is not uncommon now. NBC says Ben Collins “covers disinformation, extremism and the internet for NBC News.” NPR explains Odette Yousef “is a National Security correspondent focusing on extremism … to explore how extremist ideas break into the mainstream.”

Left-wing extremists seem nearly invisible on the assignment editor map. The Times expects this new media correspondent to be controversial: “Prerequisites include the backbone to withstand aggressive blowback, impeccable journalistic ethics and the ability to report accurately, critically and fairly on people with extremist views.”

First, we have to question whether the Times can be counted on to be accurate in calling certain views “extremist.” If you love Warren, you might think people who like Sen. Chuck Grassley are “extremists.”

Then there’s the idea of drawing “aggressive blowback” with your “impeccable journalistic ethics.” The Times is projecting its desire to tackle the “right-wing media” and curtail their influence, all the while being celebrated by the masses for being so fair and accurate.

NBC reporter Olivia Solon joked supportively on Twitter: “Although one would hope the NYT might provide some sort of exoskeleton/mech suit to help the poor reporter’s backbone.”

Perhaps the most amusing part of the Times creating a “right-wing media” beat is how the liberal media hate to be criticized or exposed or investigated. Questioning their ethics or reporting methods—or, God forbid, calling them “fake news”—is equated with authoritarianism.

But this reporter is required to have a “backbone” and go to war with conservative media “extremists,” and it’s not “Democracy Dying in Darkness.” It’s truth-seeking “independent journalism” in the service of Democracy, since Democracy and the Democrats are one and the same.

Already, LinkedIn says there are 144 eager applicants, 12 dozen drones willing to fly on dangerous missions behind enemy lines on the internet. We in the “right-wing media” await your surveillance.