‘Defund the Police’ Movement Triggered Massive Spike in Murder of Black Americans. So Much for Equity. 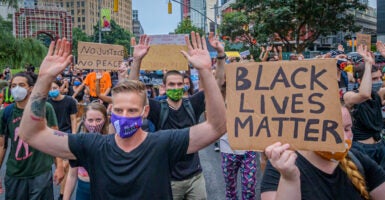 The "defund the police" movement appears to be mostly the product of elite progressive activists who drive the policies of the Democrat Party. Some are genuine, others apparently less so. Pictured: A participant holding a Black Lives Matter sign at the protest on Aug. 28, 2020, in New York City. (Photo: Erik McGregor/LightRocket/Getty Images)

The political aftermath of George Floyd’s death produced a surge in murders of black Americans, but it wasn’t at the hands of the police.

The numbers are shocking, but not surprising.

The FBI previously reported that murders increased by 30% in 2020. But there is more to that story.

According to a recent report by Fox News, FBI data demonstrates a sharp uptick, specifically in black Americans being murdered in the last few years compared to other racial groups. The surge began almost immediately after Floyd’s death at the hands of the Minneapolis police in 2020 and the subsequent riots that rocked cities across America.

Violent crime has notably increased in the last few years, but it appears to be disproportionately hitting black Americans.

Fox New further put the numbers in perspective: “The figures are more staggering considering White Americans make up 76% of the population compared to black Americans representing only 13%, according to Census data.”

Where are the Black Lives Matter founders during this appalling violent crime explosion?

Toasting champagne in a multimillion-dollar mansion purchased with money from their donors.

So much for “equity.”

The “defund the police” movement appears to be mostly the product of elite progressive activists who drive the policies of the Democrat Party. Some are genuine, others apparently less so. One way or another they had an outsized impact on media and political rhetoric and local policies.

There appears to never have been a general desire to gut police departments in America, but the crusade went on regardless. Cities and municipalities defunded the police and generally supported moving away from traditional policing in favor of replacing cops with social workers.

It hasn’t worked out.

The collective result of this anti-police movement led to what is called the “Ferguson Effect” or the “Minneapolis Effect.”

FBI crime data shows a distinct upswing in violent crime following the deaths of Michael Brown in Ferguson, Missouri, in 2014 and Floyd in 2020. Both those incidents triggered mass demonstrations, then riots, then a concerted effort to curtail police activity.

In Minneapolis there was even a failed effort to outright abolish the police.

Instead of creating police departments that function better and protect communities, we now have countless beleaguered, understaffed, and demoralized departments dealing with the largest surge in violent crime in a generation.

Following Floyd’s death, the left went all in on a “racial reckoning,” targeting American history and nearly every elite institution to trigger a cultural revolution against the “white supremacy” at the root of all things in America.

In city after city, many of which actually went through with defunding their police departments, we’ve seen historic increases in violent criminality. In this case, it seems that minorities really are suffering most.

So, will the left ever face a reckoning for triggering the largest spike in black murder in recent history?

A few have admitted to the “defund the police” mistake, but don’t expect a grand mea culpa or an inner re-evaluation of the ideology that brought them to pursue one of the more astoundingly terrible ideas in recent memory. They will argue that even pointing out this catastrophe makes you a racist. Their politicians will just deny it happened or blame the right and they will move on to other causes.

Unfortunately, it may be a long road back from the damage the defund the police movement caused. Americans—of any background—shouldn’t have to live in perpetual fear of violent crime and victimization. That’s what many will now suffer due to misguided ideology and reckless leadership.