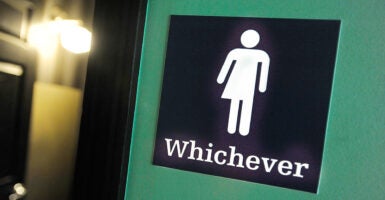 Families in Oklahoma with young daughters are bracing for the fight over transgender students’ access to public school bathrooms—and the challenge to the concepts of equality and discrimination. Pictured: A gender-neutral sign is posted outside a bathroom. (Photo: Sara D. Davis/Getty Images)

Some families in Oklahoma have found themselves bracing for the ongoing culture wars over public school bathroom facilities and the transgender movement—culture wars that have challenged the concepts of equality and discrimination.

Parents of young girls at Stillwater Middle School are disturbed that their preteen and teenage daughters are being forced to share a bathroom with a biological male who identifies as a girl.

Riley Flack is a father of three daughters. His eldest attends Stillwater. He told Fox News Digital that “a lot of people like to make it a different issue than it is and make it a bigger subject,” but that the issue is clearly that there is a boy that is being allowed in his daughter’s public school bathroom.

Pointing to the recent sexual assault cases in schools in Loudoun County, Virginia, Flack said that “there is zero reason why a boy should be allowed in the girls bathroom in a public school setting, especially at the grade of six, at 12 years old.” He said policies that allow this increase “the risk of an issue in a bathroom with an assault or otherwise.”

Parents in Stillwater are angry and have banded together and created StillwaterParents.org, a website that calls on Oklahoma Gov. Kevin Stitt and the state Legislature to create “a law stating that biological males have no right to access locker rooms, bathrooms, or any other intimate space reserved for biological females.”

Flack blamed Biden’s policy for trickling down to his daughter’s middle school and upending her right to privacy and safety while using the restroom.

“I mean, it doesn’t take a rocket scientist to figure out what sort of issues might come of a certain policy like this,” he told Fox News Digital.

One of the first things Biden did in office was to sign an executive order proclaiming, “Children should be able to learn without worrying about whether they will be denied access to the restroom, the locker room, or school sports.”

Stitt has sided with parents and girls and echoed Flack’s concerns. He told Fox News Digital, “The Biden administration’s attempt to indoctrinate our young people with radical ideas about gender and sex is risking the safety of young girls and I will not allow it in Oklahoma.”

As a father, Flack raises salient points with which most reasonable parents would agree. First and foremost, the concept of gender identity as fluid and moldable or something a person can change into like a pair of new jeans is not based on science. It is a phenomenon to be sure—it’s certainly happening, but it is not rooted in evidence or reality. It is more like a contagion.

This alone should be reason not to give a person who engages in this behavior equal legal protections to engage in such behavior—any more than unicorns should not be granted federally protected species status for being unicorns.

Nothing said here is meant to disparage anyone with true gender dysphoria, as they need help and compassion to deal with what is a very painful issue. This critique is aimed at adults who are forcing young people to accept gender fluidity, falsely claiming that science backs up their radical agenda, and propagandizing the young to selfishly validate their own feelings on the matter.

Many schools have attempted a kind of balancing act by allowing students identifying as transgender to use a facility designed just for them because a full transgender bathroom ban may result in an expensive lawsuit. However, many transgender students will buck at the compromise of transgender bathrooms and insist it is not equal enough. Of course, it is.

This is in fact the very logic behind the area of federal law called Title IX, which, among other things, mandates schools that receive federal funding provide the same sports teams for women that they do for men.

Due to differences in body structures, in general, men have a competitive advantage over women; and in the locker room and showers, society has long recognized that privacy is vital to protection. Title IX allowed women to have much-needed equality in terms of access to sports competition while still being afforded separate accommodations for reasons of privacy, safety, and fairness.

The fact that school administrations think they must accommodate biological male students who identify as transgender females by allowing them into the girls’ restrooms to infringe on the rights of female students shows how far gone the concepts of equality and discrimination have become.

This is not a slippery slope; this is an example of how policies are shoving females down the hill because a transgender person’s right to equity has trumped females’ right to privacy and safety. This is unlawful and unfair, and it really does the transgender movement no favors either.

Parents in Stillwater, Oklahoma, know this and they shouldn’t have to fight this hard for something this fundamental.