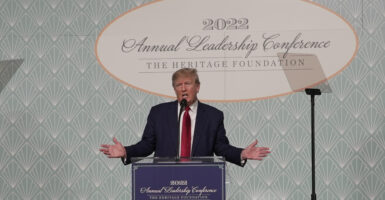 “China no longer respects us. Iran no longer fears us. With their monstrous invasion of Ukraine, Russia showed just how weak they think our leaders are,” former President Donald Trump says Thursday night in a speech at The Heritage Foundation's Annual Leadership Conference in Florida. (Photo: Mark Guiney/The Daily Signal)

“You could take the five worst presidents in American history and put them together, and they would not have done the damage that Joe Biden has done in one year,” Trump said in remarks to Heritage’s Annual Leadership Conference, held on Amelia Island, Florida. (The Daily Signal is the think tank’s multimedia news organization.)

Among the problems the former president talked about were rising inflation, disruptions in the supply chain, a southern border overrun by “millions” of illegal immigrants, America’s lower standing in the world, and emboldened enemies.

Trump blasted Biden for the nation’s humiliating retreat from Afghanistan, Russia’s invasion of Ukraine, efforts to reach a new nuclear deal with Iran, increased reliance on overseas oil, and other international developments.

“China no longer respects us. Iran no longer fears us. With their monstrous invasion of Ukraine, Russia showed just how weak they think our leaders are,” Trump said.  “They would have never done that under the Trump administration. This is the most dangerous period in the history of our country.”

However, the 45th president did note what he considers to be hope.

Recalling his campaigns for the presidency in 2016 and 2020, Trump noted that he grew the Republican Party among Hispanics as well as working-class voters.

“We grew the conservative movement into a working people’s movement and we transformed the GOP into the working people’s party, and we are never, ever going back,” he said. “We increased our size massively; we’re winning areas we never thought possible.”

Trump also recalled pushing to get a vaccine for COVID-19 more quickly than the Food and Drug Administration typically allows before giving its approval. He acknowledged vaccine hesitancy on the right, but blamed that on Democrats for attempting to take credit for achieving three vaccines after Biden came into office Jan. 20, 2021.

“One of our greatest achievements was getting the vaccine done in nine months instead of five and a half to 12 years,” Trump told the Heritage audience. “But the problem is, we saved tens of millions of lives all around the world but I can’t talk about it because our base—our beautiful base of which some of you are [part]—gets angry when we mention the word vaccine.”

“Don’t get angry,” he quipped, adding:

We did it in nine months, less than nine months, and frankly, a lot of people are living today because of that. So, I’ll talk about it. I think the other side actually poisoned people on it because they wanted to try and take credit.

Remember Biden said, ‘Oh, [Trump] didn’t come up with the vaccine.’ Except he got a shot two months before he said that. … Even his own side stopped him on that one. But we did a great job on that and it’s very important, and I’m very proud of it. Think of it. Nine months. We pushed the FDA so hard. They hate me so much.

Trump also praised the founding of the United States and the nation’s progress.

“Our founding documents are not a source of shame, they are a source of pride,” Trump said, adding, “We believe that the first duty of government is to protect and defend the interest of its own citizens. In other words, to put America first.”

Trump went on to reject wokeness and the left’s push for “equity” over equality. He noted that he is “the king of being politically incorrect.”

“We reject the discrimination and oppression of so-called equity and we embrace the eternal principle of equality under the law,” Trump said.

He also addressed parental rights in education and the increasing number of biological males competing in women’s sports.

“For two generations, we have allowed the radical left to indoctrinate America’s children from kindergarten to college, and enough is enough,” Trump said, adding:

Every mom and dad in America must be given the right to send their child to public, private, charter, or religious schools of their choice. No teacher should ever be allowed to teach transgenderism without affirmative parental consent. And men should not be allowed to participate in women’s sports.