3 Colleges Get Their Just Deserts 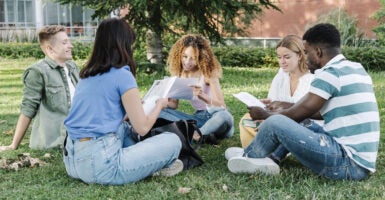 Totalitarian ideology has infected American colleges and universities, which are purveying cancel culture, wokeism, censorship, and gender dogma. Students, parents, and others are fighting back. (Photo illustration: David Espejo/Getty Images)

When the Soviet communists’ hammer-and-sickle flag was lowered at the Kremlin for the last time on Dec. 25, 1991, some said that the last refuge of Marxism was in the academic institutions of the West.

They were right. That totalitarian ideology has infected American colleges and universities and other institutions that are purveying cancel culture, wokeism, censorship, and gender dogma that rejects reality.

But students, parents, and others are fighting back. And two colleges—Oberlin College and Shawnee State University—recently got exactly what they deserve: large legal judgments against them for defamatory and discriminatory misbehavior.

A third, Clemson University, narrowly escaped getting hit with a similar type of judgment after it agreed to reverse its false finding that a male student had committed a sexual assault and paid him to go away.

That student won a defamation lawsuit against a female student, her boyfriend, and her father for making bogus charges and conspired to hide what really happened.

In Ohio, Oberlin College, a hub of political correctness, lost its appeal of a $31 million judgment for defaming a local bakery and ruining its business with fabricated claims of racism. That amount includes $25 million in punitive damages and $6 million for attorneys’ fees.

Gibson’s Bakery is a local institution that has operated for more than 130 years. In 2016, a black male student, accompanied by two black female students, shoplifted two bottles of wine after first trying to use a fake ID to buy them. The son of the bakery owner chased them out of the store, where the three students attacked him. Police arrested the students and all three pleaded guilty to misdemeanors.

Yet students at the college, with the full support of school administrators, made false claims of racism against Gibson’s, saying the shoplifters had been racially profiled and that Gibson’s was a “racist” establishment. They organized protests and vandalized and damaged the bakery.

The university canceled all its business contracts with the bakery for catering and continued the racism claims. A dean even handed out a false, defamatory flier, ignoring the report of the police investigation that found no racism and the fact that the students had pleaded guilty.

In a stunning display of arrogance, Oberlin still won’t admit it did anything wrong and hasn’t apologized to the bakery. Instead, Oberlin issued a statement saying that it is “evaluating” its options and that the “issues raised by this case have been challenging.”

The issues aren’t “challenging.” Oberlin jumped to erroneous conclusions before the facts were in and sprang on the politically correct racism bandwagon to make false charges about a local business. The only evaluation Oberlin should do is how to finally pay the judgment and fire the administrators involved.

Another school in Ohio, Shawnee State University, just agreed to pay $400,000 in damages to 20-year philosophy professor Nicholas Meriwether, along with his attorneys’ fees.

The school had punished Meriwether for refusing a male student’s demand that the professor refer to him as a woman, using female titles and pronouns.

According to the professor’s lawyers at Alliance Defending Freedom, the male student “became aggressive, physically circling him, getting in his face, using expletives, and even threatening to get him fired.”

Meriwether offered to refer to the student under any name he wanted instead of using pronouns, but the student and the university said that wasn’t good enough and that Meriwether supposedly had created a “hostile environment.”

Meriwether sued, saying that the university was violating his religious beliefs as a Christian under the First Amendment. In March 2021, the 6th U.S. Circuit Court of Appeals ruled that Meriwether could sue the university, reversing a district court decision that had dismissed his case.

That apparently led to the settlement by Shawnee, which includes the university agreeing that Meriwether will not be forced to use particular pronouns or titles when talking to students.

Finally, one of the most dangerous developments in recent years at college campuses has been universities setting up Star Chamber, Soviet-style, show trial procedures over complaints of sexual assault in which the universities deny basic and fundamental due process rights to accused students. That includes refusing to allow the students an opportunity to present exculpatory evidence, to question their accusers and cross-examine witnesses, or to be represented by a lawyer.

A South Carolina jury just awarded a Clemson University student, Andrew Pampu, $5.3 million for defamation and civil conspiracy by a female Clemson student, her boyfriend, and her father.

The university had suspended Pampu for a year after finding him guilty of sexual misconduct against Erin Wingo. To get to that finding, however, the university ignored multiple witnesses and text messages showing that Wingo had consensual sex with Pampu and manufactured a rape claim only after her boyfriend, Colin Gahagan, found out about it.

Pampu filed a lawsuit after he received a text message from Gahagan admitting that Pampu was innocent, that Gahagan had lied in the hearing, that Wingo “wanted to have sex that night,” and that Gahagan had deleted texts “from that night that prove she was f—— crazy.”

Clemson acted almost immediately to remove the disciplinary finding against Pampu and agreed to pay him $100,000, likely saving Clemson from an even bigger judgment against the university.  Of course, if it had not ignored the exculpatory evidence in the first place and assumed Pampu was guilty, it would not have had to pay anything.

Unfortunately, the trend toward madness at the secondary education level is sure to increase if the Biden administration has its way with Title IX of the Education Amendments of 1972.

The Office for Management and Budget is reviewing a new rule on the 50-year-old statute that would expand Title IX’s prohibition on “sex” discrimination to “gender identity” discrimination, thereby upending women’s sports, bathrooms, and locker rooms in schools across the country.

In addition, the new Title IX rule would roll back the Trump administration’s Department of Education rule on campus sexual assault, which requires due process protections such as representation by counsel and the right to present exculpatory evidence and cross-examine witnesses, including the accuser.

This new rule once again would implement a “guilty until proven innocent” assumption, leading to more cases such as what happened to Pampu at Clemson.

On a personal note, I’m glad that all three of my children are finished with college and made it through unscathed by what is happening in academia.

Other parents and students are not so lucky.