These 10 Incidents Highlight Importance of Second Amendment for Women 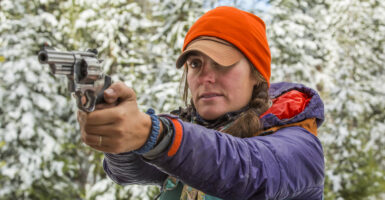 In honor of Women’s History Month, The Daily Signal highlights 10 incidents last month in which the Second Amendment made all the difference for women, either because they were armed or because another armed person came to their defense. (Photo: Steve Smith/Getty Images)

Since 1987, the United States has recognized March as Women’s History Month to celebrate the vital role of women in American history. Unfortunately, far too often we find that the armed women of history are overlooked or completely forgotten, and the vital role of the Second Amendment in the lives of American women is ignored.

Women long have availed themselves of the right to keep and bear arms in defense of life, liberty, and property—from Harriet Tubman, the famed “conductor” of the underground railroad who was known to carry loaded pistols, to Mary “Stagecoach Mary” Fields, the first black woman to be a mail carrier, who notoriously kept a .38 revolver in her apron to fend off bandits and wild animals alike.

Tubman and Fields haven’t been alone.

To honor Women’s History Month, we decided to highlight 10 incidents from last month in which the Second Amendment made all the difference for women, either because they were armed or because another armed person came to their defense.

Some gun control advocates like to claim that the Second Amendment was written by and for men, and that it leaves women to suffer as victims of gun violence.

But these claims ignore the countless cases such as the ones above, where the right to keep and bear arms was used by women or for the sake of protecting women—often from male aggressors against whom an unarmed woman would have been effectively helpless.

Women’s History Month may be over, but the importance of the Second Amendment in the lives of American women continues every day of the year.

No matter the month, the constitutional right to keep and bear arms remains in force, with no asterisk or small print excluding women.