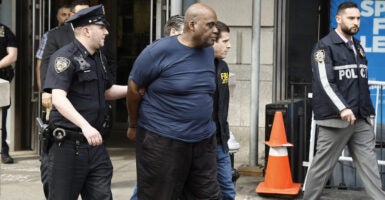 FBI agents and NYPD officers escort Frank James from the 9th Precinct after his arrest Wednesday in the shooting attack the day before at the 36th Street subway station in Brooklyn. (Photo: John Lamparski/Getty Images)

The man charged with shooting commuters on a New York subway train Tuesday left a trail on social media in which he disparaged whites and complained about racism, homelessness, and violence.

“What are you doing, brother?” Frank James, 62, of Milwaukee, said in one video, addressing New York Mayor Eric Adams. “What’s happening with this homeless situation?”

James, who like Adams is black, also talked about numerous conspiracy theories on YouTube, according to the Justice Department, and asserted: “And so the message to me is: I should have gotten a gun, and just started shooting mother——s.”

Two days before the shootings, which wounded or injured 23, James posted a video in which he asserted:

This is what white b—–s and white m———ers’ expect you to be … when you blow one of their … brains out—this is what you asked for. This is how you wanted me to be, obviously.

Among other offenses, James is charged with “terrorist attacks or other violence against a mass transportation system” in the mass shooting at the Sunset Park subway stop in Brooklyn, according to a Justice Department press release.

The FBI—criticized for pursuing Russian collusion theories, “white supremacists,” and, more recently, school parents—also had access to monitor social media posts by James or anyone else.

“Yesterday, as everyday New Yorkers commuted through Brooklyn on our subway system, Frank James—as alleged—committed a horrific act that resulted in an around-the-clock effort by the FBI’s Joint Terrorism Task Force in New York, the NYPD, and the ATF to find him and bring him to justice,” Michael J. Driscoll, assistant director in charge at the FBI’s New York field office, said Wednesday in a public statement.

“Thanks to the incredible work by all involved to identify James and get the proper information out to the public, he’s in federal custody and New Yorkers can breathe a little easier in our city today,” Driscoll said.

James was arrested Wednesday after he and at least two other tipsters called Crime Stoppers to alert police to his whereabouts in the East Village neighborhood of Manhattan, the New York Post reported.

During a press conference Wednesday, Driscoll said news reports that James previously had been investigated in New Mexico and was on a terrorist watch list were inaccurate.

Social media giants as well as the Justice Department, which includes the FBI, seem to have focused elsewhere, said Kara Frederick, director of the Tech Policy Center at The Heritage Foundation, which is the parent organization of The Daily Signal.

“Parents at school board meetings or someone online supposedly spreading COVID misinformation or disinfomaiton are viewed as … a leftist concept of terrorists, as opposed to an actual domestict terrorist threat,” she said.

Facebook, Twitter, and other social media companies also have been slow to catch up with actual examples of hate speech, she said.

“Frankly, it has just been misprioritization of moms talking about COVID cloth masks and [missing] threats that don’t comport with a narrative,” Frederick said.

James has been arrested at least 12 times by the NYPD between 1984 and 1998 on charges ranging from burglary to criminal sexual acts, the New York Post reported.

Reached by email about whether the subway shooting in New York was preventable, an FBI spokesperson referred The Daily Signal to the contents of the press conference Wednesday and declined to comment further.

A spokesperson for Google, the corporate owner of YouTube, did not respond Thursday to an inquiry from The Daily Signal for this report.

James posted messages on Facebook about guns and bullets, and about the 9/11 terror attacks being an inside job.

In one video, James said: “This nation was born in violence, it’s kept alive by violence or the threat thereof, and it’s going to die a violent death.”

The criminal complaint against James says that for the attack during morning rush hour Tuesday, he used a Glock 17 pistol that he bought in Ohio.

Prosecutors say that James, wearing a surgical mask, set off a smoke-emitting device in a train car before firing at subway riders.

James had arrived in New York earlier that day in a rental van driven from Pennsylvania, authorities said. He parked the van on Kings Highway, about two blocks from the Sunset Park station entrance.

After the attack, James left behind a bag that included fireworks, a plastic container containing gasoline, and a torch.

In another video, extending previous racial rants, James said: “There is no natural reason for there to be such a thing as an American Negro, African American, there is no reason for it. Except for you to be a slave. That is your rightful place, it always will be.”

James took video of his journey from Milwaukee to New York that began March 20, with stops in Illinois and Pennsylvania, saying at one point while looking at the camera: “All I can say is, good riddance. I will never be back again alive.”