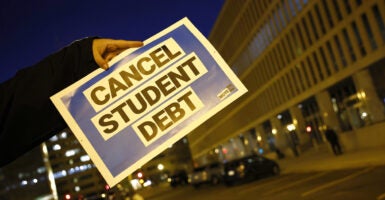 Student loan debt holders are getting another extension on their break from payments through Aug. 31, according to the Department of Education. Pictured: Demonstrators call on the Biden administration to cancel student debt on March 14 in Washington, D.C. (Photo: Paul Morigi/Getty Images/We The 45 Million)

Student loan debt holders are getting another extension on their break from payments, but that doesn’t mean no one’s paying. American taxpayers are picking up the bill, amid news that inflation soared a shocking 8.5% compared to this time last year.

The announcement from the U.S. Department of Education states that the pause on student loan payments due to the COVID-19 pandemic will be extended again through Aug. 31: “The Department will continue to assess the financial impacts of the pandemic on student loan borrowers and to prepare to transition borrowers smoothly back into repayment.”

Average Americans have plenty of financial stress these days. With the price of gas, groceries, and other necessities skyrocketing, it’s hard to even leave your house without spending hundreds of dollars.

Rather than suggest some shift in economic policy to help combat this pressing issue for American families, the president shifts blame to either the former administration or Russian President Vladimir Putin.

But when it comes to student loans, the Biden administration is more than willing to adjust policy to provide economic relief. The only problem is that this relief disproportionately benefits the elite minority of Americans with college and graduate school degrees.

Democratic politicians like Rep. Alexandria Ocasio-Cortez, D-N.Y., and Sen. Elizabeth Warren, D-Mass., have been vocal about their desire for the president to wipe out student loan debt all together. Warren has specifically put forth the popular proposal to cancel $50,000 of student loan debt for all borrowers.

But this policy proposal is not only incredibly costly, it is also regressive. Researchers at the University of Chicago found that if the government dismissed $50,000 in student loan debt, those at the bottom of the economic ladder would receive 8.5% of the relief, while those who find themselves among the top 20% of earners would receive 22% of the benefit.

Similarly, researchers at the University of Pennsylvania found that a borrower in the highest income bracket would receive five times more of their student loans forgiven than the average borrower in the bottom bracket.

Florida State University gave some $17.7 million in federal relief spending to 16,000 students. Checks to Penn State students were close to $2,000 per student. Colleges distributed funds based on student need according to student information found on financial aid applications, which means nearly all of them had loans. Essentially, colleges have been complicit in what amounts to a federal student loan money-laundering program.

At the end of the day, we must call this freeze on student loan payments what it is: a handout to the elite and de facto student loan debt forgiveness. While the Biden administration might claim that outright loan forgiveness is not on the table, continuously extending the moratorium on loan payments achieves a similar end.

Asking average Americans to add $1.7 trillion in student loan debt onto their financial burdens at a time where the U.S. economy is in such a fragile state is simply unjust. Someone who chose to forgo college and learn a valuable trade through a vocational education program—or who saved up to pay for college—should not be asked to pay off the debt for law school graduates.

The Biden administration misses the mark in making college loans another entitlement program. As Americans desperately yearn to return to pre-pandemic normalcy, we should not burden taxpayers with yet another tax burden.