Who Suffers the Most From America’s Crime Wave? 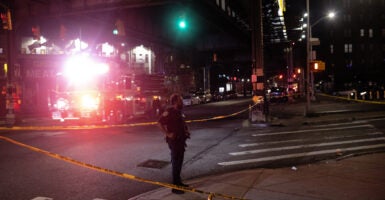 The spike in crime is hurting a lot of people, and black communities bear the heaviest burden. Pictured: Police officers secure a crime scene and look for shell casing after a shooting on Aug. 13, 2021, in the East New York neighborhood of Brooklyn. (Photo: Andrew Lichtenstein/Corbis/Getty Images)

Violent crime, like the price of gas, is rising. Not everyone is experiencing this crime wave in the same way. For some, it’s a distant issue experienced by other people somewhere else. For others, it’s a daily life-threatening concern.

For other racial groups, the numbers are either decreasing (in the case of both white victims and offenders), increasing by much smaller amounts, or holding constant.

Crime by the Numbers

The picture that federal crime data provide is bad, but the reality of crime in the United States is even worse. The FBI’s data is not complete. It relies on local law enforcement agencies across the country to voluntarily share their local data with the FBI. Not all do.

In truth, violent crime—especially homicide—is worse than the National Incident-Based Reporting System statistics show. According to other sources, the number of homicides in 2020 was more than double what those statistics report: 21,750.

However high the raw numbers are, the upward trend is disturbing. For most types of violent crime tracked by the FBI, the number of offenses has more than doubled in the last 10 years.

The increase in crime, though drastic, has not been steady over the course of the past decade. America witnessed much larger spikes in violent crime in 2020, especially homicide, than any of the previous 10 years.

Although the National Incident-Based Reporting System is not complete, it provides useful insights into who suffers from and who commits crime because it tracks demographic data about both sets of people.

We utilized the FBI’s crime data to compare victim statistics to determine which groups have been most impacted by the rise in violent crime. Factoring out the cases in which the race of the victim was unknown, we calculated who has borne the brunt of the crime wave.

For this analysis, violent crime includes assault, homicide, and sex offenses. We found that the increase in these crimes has fallen hardest on black people.

For Native Americans and for Asians, the changes were smaller. For the former, the percentage increased by 0.3% to compose 1.1% of all victims. The latter saw an increase of 0.4% to compose 1.2% of victims in 2018, which held constant through 2020.

The most significant changes, therefore, were that black people represent an increasing share of violent crime victims, and white people a smaller share. It’s true that we’re dealing in relatively small percentages (less than 5%), but when you consider that the number of violent crimes has more than doubled, you realize that these increases are significant.

The true size of the problem is made starker when we consider that African Americans make up only 14.2% of the total population (including multiracial populations who identify as black “in combination” with another race), but 32.7% of all violent crime victims and 54.4% of homicide victims. Thus, these small percentages represent an enormous problem that, for black people, is getting worse, both in relative and absolute terms.

In fact, the opposite is true. Again, after factoring out the cases in which the race of the perpetrator was unknown, the relative share of offenders by racial groups followed a similar trend to the share of victims.

This small increase hides a more dramatic recent trend because the percentage of black offenders fell several percent from 2011 until 2019. That year, it jumped 1.0%, and in 2020 it jumped another 1.2%.

Again, these are small percentage changes, but considering the surging crime numbers and the fact that African Americans make up a relatively small percentage of the total population, the implications are huge.

The increase in black offenders and black victims is reminiscent of the fallout from the Black Power movements of the 1960s. Historian C. Vann Woodward recounts that history in his magisterial book “The Strange Career of Jim Crow.”

Woodward observed that radicals began to reject the approach of “the old civil rights movements,” which called for peace, equality, and integration. The radicals favored “racial separatism” and “black nationalism,” which gave way to “bursts of black violence, disorder, and frustration.” The irony of this violence, however, was that it occurred primarily in black neighborhoods, and “the main victims” were working-class black people.

The trendy race-wisdom of today shares similar traits. Like the Black Power movement, it is more focused on calling out and rebuking the supposed omnipresent specter of white supremacy than it is on peace, equality, and integration.

As with the riots of the 1960s, the anti-police riots of 2020 caused significant harm to black neighborhoods and black-owned businesses. Additionally, on social media sites associated with these views, violent rhetoric is common.

Ultimately, more research is needed before we can conclude that the present-day race-essentialist rhetoric is a causal factor in the present increase in black victims and offenders. Still, the historical parallels provide some support for the theory.

Regardless, whether it is caused by race rhetoric, the Minneapolis Effect, rogue prosecutors, or some combination of them or other things, the spike in crime is hurting a lot of people, and black communities bear the heaviest burden.

This article has been updated to correct a mistake regarding the rate of increase of violent crime according to federal crime data.