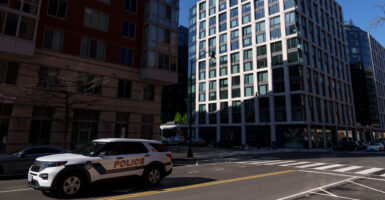 A Capitol Police vehicle drives past the Crossing apartment building, right, April 8, 2022, in Washington, D.C. The building, which was raided by the FBI on April 6, is the home of two men accused of posing as federal law enforcement employees and ingratiating themselves with U.S. Secret Service agents. The men are facing charges for impersonating members of the Department of Homeland Security. (Photo: Drew Angerer/Getty Images)

Two men accused of posing as federal law enforcement agents were tipped off to the FBI’s raid on their apartments, according to a court document filed Sunday.

Arian Taherzadeh, 40, and Haider Ali, 36, were arrested Wednesday in Washington, D.C., on suspicion of posing as Department of Homeland Security agents since as early as February 2020 to buy off members of the Secret Service, including one agent assigned to first lady Jill Biden’s security detail, according to an affidavit.

Taherzadeh and Ali were tipped off before the FBI came for them, buying the two men time to stash guns and other possessions, according to a memo from U.S. Attorney Matthew Graves.

The two are each charged with the federal offense of false impersonation of an officer of the United States, the U.S. Attorney’s Office said in a statement obtained by the Daily Caller News Foundation.

UPDATE: FBI now entering the building with boxes, some appearing to be for guns. pic.twitter.com/4ym80QLDaX

Officers reportedly found shipping items and labels in one of the men’s apartments, prosecutors said in the Sunday filing.

“This is consistent with the prior pattern and practice of providing federal law enforcement agents with gifts and items of value, and suggests that Taherzadeh and/or Ali shipped the package to the USSS Uniformed Division Officer in an attempt to corruptly enlist him in secreting evidence,” the filing said.

Investigators are also looking into the possibility that the two accused men are tied to the Islamic Revolutionary Guard Corps, a U.S.-designated terrorist organization; Iran’s Quds Force; and/or Pakistani intelligence, CBS News reported.

Two men may have used tactics common with foreign intelligence services in luring U.S. officials to reveal information, according to retired FBI agents who spoke with the Daily Caller News Foundation.

Prosecutors reportedly said Thursday that Ali told witnesses he had connections with Pakistani intelligence and that the government had obtained his passport with Pakistani visas and two Iranian visas.

According to an affidavit, Taherzadeh and Haider had posed as Department of Homeland Security agents since as early as February 2020 and built relationships with Secret Service agents, one of whom was assigned to the first lady.

I actually laughed when I read it because … there’s so many things about this story and so many questions, but, these two guys masquerading as federal agents, and they were really duping other federal agents who really are federal agents. It’s a very unique thing. But I don’t believe it’s anything different than what we’ve seen historically in terms of foreign services trying to gain access to, in this case, the White House, but to high level U.S. government officials through lower level officials.

While overseas on assignments, Chacon said, he observed the tactics used by foreign governments to gain access to U.S. officials.

“I went overseas several times with the FBI and the initial training, we worked with the State Department, and they always warned us about … if you go to … the local watering hole near any US Embassy overseas, where they know a bunch of embassy personnel just kind of gather after work and have a drink or two, that’s where they target,” Chacon said, adding:

And if you meet somebody in there, and they start being friendly to you, all of a sudden, you have to be on guard on that stuff … it’ll be subtle. But next thing you know, they’ll say, ‘Oh, I know somebody works in the embassy. Do you know John Smith?’ … So, those types of things, you should always be on guard. Those of us who have maintained top secret security clearance, I always have to be on guard for people that might try to recruit us or might try to compromise us. And this is like, an obvious way to do it. But usually, it’s much more subtle than this …

In many fraud cases, perpetrators use one target to gain credibility that they use later to access others, Chacon explained.

“[T]he way fraudsters work is they compromise that one person or that one document, and then they get legitimate people basically to be standing up for them to backstop their fraud. So, at the end, when it all comes down, you can see behind the curtain, but that’s not what people we’re seeing during the fraud itself. They were seeing legitimate people vouching for these people, right, so it’s really a house of cards,” Chacon said.

“Card fraud and things like that are one of the ways that foreign agents illicitly gained funds to continue their activities in the United States. Terrorist groups do those things too,” Hulsey said.

According to the affidavit, Taherzadeh bought the Secret Service agents rent-free apartments, each costing $40,000 a year, iPhones, surveillance systems, drones, a flat screen tv, an assault rifle case, a generator and law enforcement paraphernalia. He also offered Secret Service agents “official government vehicles” and volunteered to buy a $2,000 assault rifle for the officer assigned to the first lady’s security detail.

Four members of the Secret Service were put on administrative leave April 4 pending the outcome of the investigation, according to the court document.

“When it all comes down, you can kind of see it, but it’s much more difficult to see when it’s going on, particularly if they co-opt legitimate people early on to stand up for that. And then people … don’t look as hard,” Chacon said.

At this point, the FBI likely is collecting information from other U.S. intelligence and law enforcement agencies and questioning foreign intelligence partners, in addition to accessing open source and classified material to understand why and how this happened, Hulsey said.

“A lot of us are dumbfounded on this one,” Chacon said, speaking for himself and other retired FBI colleagues.

Editor’s note: This article includes the contents of another report filed over the weekend by the same author.