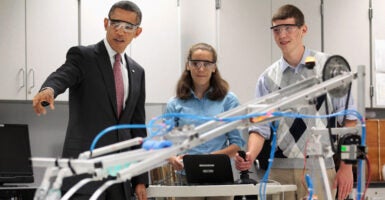 A federal lawsuit is seeking to get race-based admissions thrown out at the prestigious Thomas Jefferson High School for Science and Technology in Alexandria, Virginia. Pictured: Then-President Barack Obama visits the school on Sept. 16, 2011, and watches as then-students Meghan Clark and Nathan Hughes demonstrate a robot created in the school’s prototyping and robotics senior research labs. (Photo: Chip Somodevilla/Getty Images)

A Virginia parent won a legal victory when a Fairfax County judge dismissed four charges of libel and slander with prejudice Friday.

Harry Jackson, a former PTA president of Thomas Jefferson High School for Science and Technology who opposed changes to the school’s admissions policy, was facing libel and slander charges in the wake of claiming that a proponent of the new admissions policies exhibited “grooming behavior” on social media.

The new policies, which critics have characterized as “race-based,” eliminated standardized testing requirements and were found by a federal judge to discriminate against Asian Americans.

“It was a great day for parents maintaining their right to free speech, and if they see something of concern when it comes to child safety, to say something without fear of reprisal,” Jackson told the Daily Caller News Foundation.

A lawsuit against Fairfax County Public Schools that includes Jackson as a plaintiff seeks to strike down the new admissions policies as being race-based. The 4th U.S. Circuit Court of Appeals recently granted a stay in the case that allows the current admissions policy to remain in place.

Jorge Torrico, a member of the TJ Alumni Action Group, an advocacy group that favored the changes to the admissions process, alleged to the Fairfax County magistrate that Jackson violated Virginia’s criminal libel and slander law by making the “grooming behavior” claims, according to legal documents.

Fairfax County Commonwealth Attorney Steve Descano’s office sought to drop prosecution Thursday, but Jackson’s attorney, Marina Medvin, objected and instead filed a motion to have the charges dismissed with prejudice.

“The judge did not reach the constitutional issues of the statute that was used to charge the ‘grooming’ words,” Medvin tweeted.

“This is an important victory for not just Harry Jackson, but also parents and journalists everywhere,” Asra Nomani, a co-founder of Coalition for TJ, told the Daily Caller National Foundation. “A woke activist used a little-used statute to criminalize speech, and prosecutor Steve Descano allowed this harassment to hang over Harry’s head for months.”

“I believe this dismissal, coupled with the publicity from this case, will hopefully restore the public’s trust in the First Amendment,” Medvin said. “Nonetheless, my work is not done. My next project is to get this law off the books. Next stop is Richmond.”

The Fairfax County Commonwealth Attorney’s Office did not respond to a request for comment.