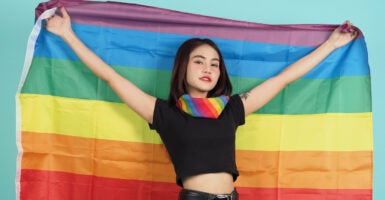 Alabama's legislation would ban medical treatments for the purpose of changing a child’s appearance or affirming his or her gender identity. (Photo illustration: ppengcreative/Getty Images)

If signed by Alabama Gov. Kay Ivey, a Republican, the bill would treat the castration of children and other sex-change treatments as Class C felonies. Such felonies carry a penalty of up to 10 years in prison for medical practitioners, Politico reported.

The legislation would ban medical treatments done for the purpose of changing a child’s appearance or affirming his or her gender identity, including drugs that halt healthy puberty; cross-sex hormones; surgical sterilizations such as castration, vasectomies, and hysterectomies; cosmetic genital reconstruction surgeries; and removal of healthy body parts.

The Alabama bill makes exceptions for male circumcision and for treatment of medically verifiable sex disorders such as chromosome irregularities. The bill also makes it illegal for teachers and other school employees to encourage children to withhold information from their parents about their gender confusion.

An attorney from the American Civil Liberties Union of Alabama called the Alabama legislation “shameful.” A senior attorney for the LGBT activist organization Lambda Legal called it “cruel, dangerous, and unconstitutional,” according to an ACLU press release.

Alabama is the first state to attempt to explicitly ban sex-change procedures for minors. Texas plans to prosecute parents who medically “transition” their children to the opposite sex under existing child abuse laws.

It isn’t clear whether Ivey will sign the bill. The governor’s office did not immediately respond to the Daily Caller News Foundation’s request for comment.