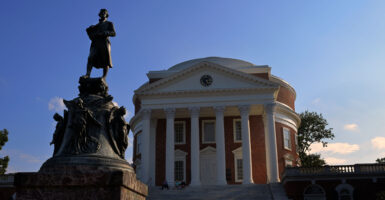 A statue of Thomas Jefferson stands in front of the Rotunda at the University of Virginia in Charlottesville, Virginia, on Sept. 11, 2020. Jefferson, who founded UVA, would likely be appalled by The Daily Cavalier student newspaper's editorial board's abandonment of a commitment to free speech. (Photo: John McDonnell/The Washington Post/Getty Images)

“Here we are again,” began an editorial in The Cavalier Daily, the University of Virginia’s student newspaper, urging censorship of a speaker at the university.

Here we are again, indeed—yet another column adding to the national chorus decrying free speech, this time authored by the newspaper’s very own editorial board.

At this point, sadly, pieces like this one are a dime a dozen.

The column in The Cavalier Daily, however, is so brazen in its advocacy of censorship that it warrants discussion simply because it so readily gives away the left’s real objectives when it comes to restricting free speech and debate.

Considering plans for former Vice President Mike Pence to speak at the university in April, the editorial board found it necessary to rail against Pence in an editorial, “Dangerous rhetoric is not entitled to a platform.”

After highlighting the numerous run-ins with free speech principles that had recently occurred on campus, the authors question “what should be protected under the premise of ‘diversity of thought’ and more importantly, what values we choose to accept on Grounds?” (“Grounds” is a term used by students for the campus of the University of Virginia.)

To this invented conundrum, “the answer is simple. Hateful rhetoric is violent—and this is impermissible.”

Let’s unpack that quote for a second. From such a short-but-beguiling statement, there are already three significant takeaways.

The first is that “diversity of thought,” which is placed in scare quotes as if to dismiss it pejoratively, is distinct from, and thus mutually exclusive with, the “values we choose to accept on Grounds.”

It never occurs to these student “journalists” that diversity of thought is a value that ought to be espoused in and of itself, especially in what used to be the fertile garden of heated-but-respectful debate and dialogue, or what we now call the modern university.

Mutual exclusivity, then, denotes that a choice must be made between the two options. The choice that the editorial board makes is, of course, blatantly clear: The concern over what values the university should accept on campus is emphatically more important than any concern over “diversity of thought.”

Thus, true diversity of thought and viewpoints cannot be tolerated, and only those views within preapproved ideological parameters are granted access to the school’s platforms.

And who shall set and approve those parameters? Well, only those individuals who agree with the editorial board.

Finally, the statement parrots the oft-repeated trope that hate speech is violent and thus not protected speech. As a legal matter, this claim is simply false. As recently as 2017, the Supreme Court unanimously reaffirmed the long-standing notion that “speech may not be banned on the ground that it expresses ideas that offend.”

What’s more, the Supreme Court has never equated “hate speech” with violence, but instead has recognized a separate category of unprotected speech; namely, “fighting words,” or speech that is likely to incite imminent violence.

As the University of Virginia is a public university, such a principle extends to its campus, much to the chagrin of its authoritarian-minded student journalists.

And, of course, what the purveyors of modern woke cultural orthodoxy—like the editors at The Cavalier Daily—assert is that hate speech is any opinion they disagree with, on issues such as abortion, religious tolerance, illegal immigration, and men invading women’s sports to the great detriment of University of Virginia female athletes.

To equate the expression of such views—and the speech of a former vice president of the United States—with “violence” (which is criminal behavior) is not only absurd, but also dangerous to the continued functioning of a democratic republic that thrives on the free exchange of ideas.

It is the type of attitude one finds in Third World dictatorships.

Before the publishers of woke dictionaries change the definition to fit their agendas, one may recall that the meaning of “violence” involves physical force intended to injure, damage, or destroy.

To liken the expression of an opinion to violence, to harp about how Pence’s mere presence and speech “directly threatens the presence and lives of our community members,” and to argue that the university allowing Pence to speak is “to fail to protect the lives of those on Grounds who Pence blatantly threatens” is the epitome of irrationality.

What really poses a threat to the long-term health of the University of Virginia community is a student newspaper that doesn’t understand the importance and protections of the First Amendment, under which it—and all students—can express their own opinions without fear of retribution and punishment, no matter how stupid, ignorant, and immature.

What threatens the University of Virginia community is the push to censor anyone who disagrees with the newspaper’s view of the world.

Thomas Jefferson was the founder of the University of Virginia, and every freshman there learns quickly that a guiding principle of the college is to ask: “What would Jefferson do?” Yet it is impossible to imagine that Jefferson—the author of the Declaration of Independence and the drafter of a Virginia bill later considered a model for the First Amendment—would endorse the views taken up by The Cavalier Daily.

If he had known that the “free” press he had defended so vociferously would eventually shut the doors on public debate instead of opening them, Jefferson might well have considered implementing a class explicitly reminding students of the importance of free speech as he was designing the university’s original courses.

To be clear, the editors are free to express whatever ludicrous views they please on Pence’s character and their disagreement with his opinions on politics, culture, and society.

What is unacceptable, however, is their sheer “1984”-style narcissism—that the university and its spaces are their exclusive platforms, giving them the power to restrict and cancel those who don’t conform to their political and cultural orthodoxy.

They want to destroy the fundamental concept that a university and its classrooms are a place where the marketplace of ideas can flourish—the “nurseries of democracy,” as Supreme Court Justice Stephen Breyer wrote in 2021 in Mahanoy v. B.L.

Instead, they want to occupy it and claim ownership over what was never theirs in the first place.

Unfortunately, too many university administrators have been willing to hand over the gavel to radical, vociferous activists out of fear, cowardice, sympathy, or all of the above. The result is an institutional malaise characterized by radical leftism and a culture of self-censorship that chills self-expression and forces students into total ideological compliance.

And don’t think this malaise is confined to an academic niche. It permeates everything from the most prestigious universities to the community college in your neighborhood.

At Yale Law School recently, a panel of speakers hosted by The Federalist Society was boycotted, interrupted, and shouted down. Never mind that it was a bipartisan panel on the importance of free speech. Oh, the irony!

Law students who are supposed to be learning how to advocate their future clients’ views even on very contentious issues in a civil, peaceful, and respectful manner instead acted like Fascist thugs in Italy or Germany in the 1930s. They showed that they are unqualified to be lawyers and don’t have the most basic understanding of the importance of the First Amendment.

Unfortunately for the majority of sensible Americans, there is no painless panacea to the rapidly spreading censorship disease represented by the thoughtless editors of The Cavalier Daily.

The only way to repel this assault on the First Amendment and free speech is through vigilance and each of us daring to speak up, if only to say that this oppressive instinct is dangerous, degrading, and harmful to the open-mindedness and free thinking that used to define the American university and American society.

If we do not act now, we risk realizing Ronald Reagan’s ringing prophecy that freedom is never more than one generation away from extinction.