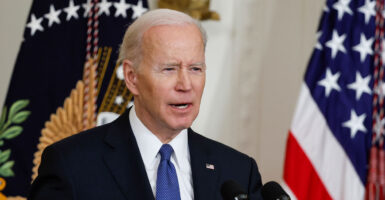 While vice president, Joe Biden sent a letter of recommendation for the son of a Chinese investment firm CEO directly to the president of Brown University in February 2017. Pictured: Biden speaks Tuesday in the East Room of the White House. (Photo: Chip Somodevilla/Getty Images)

Emails from a laptop owned by Hunter Biden reportedly reveal that President Joe Biden wrote a college recommendation letter for the son of one of Hunter Biden’s business partners.

Jonathan Li reportedly emailed Hunter Biden and two other individuals in January 2017, asking for advice on how to get Christopher Li into one of three colleges: Brown University, Cornell University, and New York University.

Biden has repeatedly said that he didn’t discuss Hunter’s business ventures with his son.

“Hunter asked me to send you a copy of the recommendation letter that he asked his father to write on behalf of Christopher for Brown University,” Eric Schwerin, president of Rosemont Seneca, Hunter Biden’s firm, wrote back in an email Fox reported. “The original is being FedExed to Dr. Paxson directly at Brown.”

Li responded to the email, saying: “It is just great! Thank you very much!”

“And Hunter, thank you very much too,” Li added.

Joe Biden has denied knowledge of his son’s business activities, and has claimed his son did nothing illegal on multiple occasions.

Hunter Biden’s laptop was the subject of a New York Post report that was censored by social media companies that claimed the material was hacked.

In October 2020, an email from a copy of the hard drive obtained by the Daily Caller News Foundation was authenticated by cybersecurity expert Robert Graham.

Last month, The New York Times admitted the laptop and its contents were authentic in a report discussing an IRS investigation into the younger Biden’s financial dealings.