Hunter Biden, the Invisible Government, and the Laptop From Hell 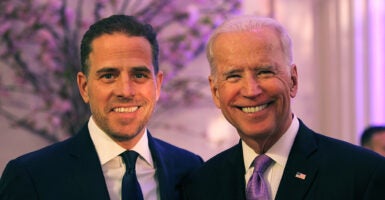 In 1912, President Theodore Roosevelt warned, “Behind the ostensible government sits enthroned an invisible government owing no allegiance and acknowledging no responsibility to the people. To destroy this invisible government, to befoul the unholy alliance between corrupt business and corrupt politics, is the first task of the statesmanship of the day.”

This nearly 100-year-old warning is apropos as one considers the revelations of corruption oozing out of Hunter Biden’s abandoned laptop that was discovered and turned over years ago to law enforcement by a Delaware repair shop.

In the Oct. 22, 2020, presidential debate, President Donald Trump confronted former Vice President Joe Biden about corrupt Biden family foreign business dealings to the moderator: “If this stuff is true about Russia, Ukraine, China, other countries, then he’s a corrupt politician. … It’s the laptop from hell.”

Trump was referring to a laptop replete with criminal evidence that was nevertheless successfully discredited by Joe Biden, the intelligence community, and the media as “Russian disinformation.” Biden’s response in the debate: “There are 50 former national intelligence folks who said that what this, he’s accusing me of is a Russian plan.”

Well over a year later, the mainstream media has just grudgingly acknowledged the laptop and its contents reflect a plan, but not a Russian one. Two recent guests on my “Armstrong Williams Show”—former Attorney General William Barr and the retired chief of the CIA Weapons of Mass Destruction Terrorism Unit, Charles Faddis—took issue with the lies told to suppress the important revelations on the laptop that would have otherwise derailed Biden’s path to the presidency.

I asked Barr: “Was it a Russian plot,” as Biden claimed?

Barr asserted that Biden “knew it was false when he said it and that was quite appalling to me that he would say that in a debate. The media was on board with suppressing the information before the election.”

Faddis, who has possessed and studied the laptop for over a year, answered the second question—whether foreign powers purchased the Oval Office through Hunter Biden—less diplomatically: “Hunter is the bagman for a family enterprise.”

These are just a few of the facts.

Joe Biden was the Obama administration’s point man in Ukraine. His son Hunter Biden, at the time a self-confessed crack addict, monetized the vice president’s role by receiving millions of dollars in payments from Ukrainian oligarchs—plural—although not all of those oligarch clients have to date been revealed.

Yet unquantified millions flowed to Hunter Biden and the president’s brother, James Biden. With neither man possessing any discernible skills or relevant experience, what did these Bidens have to sell? All Hunter and his Uncle Jim had to offer for these millions was Joe Biden.

Results followed. In 2016, Joe Biden flew to Ukraine and threatened President Petro Poroshenko, the Ukrainian oligarch Biden and the U.S. backed to be their leader, to withhold $1 billion in aid to Ukraine unless its top prosecutor, Viktor Shokin, was fired in the six hours before Biden departed. Shokin was then investigating Ukrainian energy company Burisma Holdings, one of Hunter Biden’s clients, for corruption.

“Well, son of a bitch, he got fired,” Joe Biden later bragged to the Council on Foreign Relations. But the media declared the Shokin story, like the laptop story, a “discredited” conspiracy theory.

In 2018, Devon Archer, Hunter Biden’s partner and fellow board member on Burisma, was convicted of defrauding a Native American Indian tribe out of $60 million in a fake bond offering. Archer roomed at Yale with a third partner in his and Hunter Biden’s advisory firm, Rosemont Seneca Partners—Christopher Heinz, whose stepfather was former Secretary of State John Kerry.

Inconveniently, at the time of this conviction, the presidential campaign season was about to get underway. Obama-appointed Judge Ronnie Abrams temporarily overturned Archer’s conviction, claiming wildly that Archer was “innocent,” averting the political problem.

“Innocent” is like “Russian plan”—an empty word, utterly unsupported by facts, diabolically designed to obfuscate and delay. Only after Joe Biden was elected president was Archer sentenced to join his confederates in prison. Archer was represented by the law firm where Hunter Biden served as of counsel—Boies Schiller Flexner.

In 2019, Trump was impeached for asserting in a phone call with Ukrainian President Volodymyr Zelensky, according to whistleblowers, that he would withhold military aid to Ukraine unless Ukraine opened an investigation into Joe and Hunter Biden.

Two of the whistleblowers—Lt. Col. Alexander Vindman and then-National Security Council Senior Director Fiona Hill—were represented by Boies Schiller Flexner. But as will soon be revealed, Burisma was just part of the Bidens’ Ukraine frolic.

As for China, Faddis explained on my show that it maintains a program called the “United Front” that sets out to buy elites in the U.S. who can further the interests of China and the Chinese Communist Party. The “laptop from hell” revealed $4.8 million paid by United Front participant company CEFC Energy to both Hunter Biden and James Biden following a trip Hunter took on Air Force Two with his father to China. What was China buying from a crack addict and Uncle Jim?

In Russia, Hunter Biden and Archer reportedly received a $3.5 million wire from Elena Baturina, a Russian oligarch who allegedly received illegal construction contracts from her husband, former Moscow Mayor Yury Luzhkov. The money went to a Rosemont Seneca Thornton LLC’s bank account in 2014, and an additional $242,000 to the bank account in 2015.

Biden’s lawyer’s response was more preposterous than “Russia plan”: “Hunter Biden (the founder of Rosemont Seneca Advisors) had no interest in and was not a ‘co-founder’ of Rosemont Seneca Thornton, so the claim that he was paid $3.5 million is false.”

In Romania, Hunter Biden and Boies Schiller Flexner were hired by Gabriel Popoviciu, a Romanian tycoon seeking to get his bribery conviction overturned with a media and government influence campaign.

These are merely the tips of the Bidens’ influence peddling iceberg. Both Barr and Faddis have raised serious questions about foreign corruption of the Oval Office, threats to our national security, and the politically motivated suppression of the truth by media and intelligence services.

The FBI has possessed Hunter Biden’s laptop since 2019 but has done nothing. This is precisely the circumstance that necessitates appointment of an independent counsel to investigate these urgent matters and deliver a report outside the political sphere.