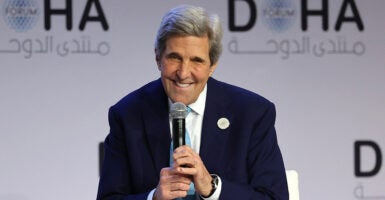 Special Presidential Envoy for Climate John Kerry went on the world stage and suggested that climate change regulation is on par with, or more important than, a war in Europe. Pictured: Kerry speaks during an interview plenary session at the Doha Forum in Qatar's capital on March 26. (Photo: Karim Jaafar/AFP/Getty Images)

Environmental extremism in government is increasingly becoming unhinged, both domestically and internationally.

Here are three recent examples of this extremism:

1. John Kerry, the Biden administration’s special presidential envoy for climate, has made alarming remarks regarding climate change and the war in Ukraine.

As reported in National Review, “Kerry fretted that the conflict [in Ukraine] might distract from the threat of climate change, and expressed his ‘hope’ that ‘[Russian President Vladimir] Putin will help us to stay on track with what we need to do for the climate.’”

Sen. Ben Sasse, R-Neb., rightly put this extremism in perspective, “Is he unaware that widespread war is now possible in Europe for the first time in 77 years? This man is not the secretary of defense; he’s not the secretary of state. John Kerry has a made-up position as international climate scold.”

Americans should be shocked by Kerry’s statement.  After all, a leading Biden administration official went on the world stage and suggested that climate change regulation is on par with, or more important than, a war in Europe.  Worse still, he publicly hoped for help from the war’s instigator (Putin) for his climate crusade.

2. Last week, U.S. Secretary of Agriculture Tom Vilsack rejected an effort to increase domestic food production to mitigate the threat of a global food shortage due to the war.

As background: Ukraine is a critical exporter of key agricultural commodities to certain countries, especially in North Africa and the Middle East. The war threatens Ukraine’s ability to export available food and to plant and harvest future crops.

Meanwhile, in the U.S., the U.S. Department of Agriculture pays American farmers to not farm their land under the Conservation Reserve Program.

Naturally, agricultural groups requested that Vilsack  allow the farming of land idled by the Conservation Reserve Program, but he rejected the idea, arguing that doing so would cause “a significant and detrimental impact on producers’ efforts to mitigate climate change and maintain the long-term health of their land.”

So instead of making it possible to increase food production to address a potential global food crisis, Vilsack appears to be more concerned with climate change.

Claims from the Biden administration that land under the Conservation Reserve Program is “marginal,” and not likely to help with crop production, ignore that about 25% of the idled land is considered prime farmland. Further, even for “marginal” land, farmers, not federal bureaucrats, are best positioned to know whether farming the land is appropriate because they care the most about “the long-term health of their land.”

To address the possibility that Russia would stop exporting oil and natural gas to Europe, the report doesn’t discuss the obvious solution: increasing oil and gas production. That’s because the solution wouldn’t align with the International Energy Agency’s goal to achieve a “pathway towards zero emissions by 2050.”

Instead, according to the International Energy Agency, the public needs to change how they live. In fact, the report explains, “Most of the proposed actions in the 10-Point Plan would require changes in the behavior of consumers, supported by government measures.”

Here are just five of the 10 recommendations:

The report doesn’t argue against the extremist policies that got Europe into this mess and instead seeks to fundamentally alter peoples’ way of life.  It presumes that the public needs to change and stop enjoying ordinary things like going to work or driving on Sundays.

The International Energy Agency’s report is an example of environmental “gaslighting.” It shames the public into believing that the harm imposed upon them by government policies is their fault and not the result of environmental extremists wielding power.

Nobody should feel guilty for enjoying the benefits arising from human ingenuity and energy abundance. Society should continually seek improved standards of living, not impoverished ones, and policymakers who think otherwise need to stop imposing their dour ideology on the public (even as they likely don’t follow what they preach).

Policymakers should stop treating environmentally extreme policies from the Biden administration and certain international circles as anything other than an extremist ideology whose first victim is common sense.