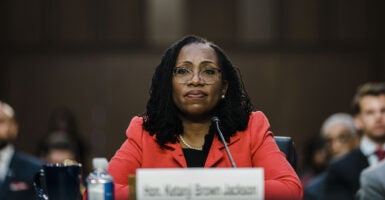 Supreme Court nominee Ketanji Brown Jackson's sentences in all three categories of child pornography crimes were significantly more lenient than those of other federal judges. Pictured: Jackson listens to a question March 22 during her confirmation hearing before the Senate Judiciary Committee. (Photo: Kent Nishimura / Los Angeles Times via Getty Images)

Judge Ketanji Brown Jackson’s sentencing pattern in child pornography cases was one of the big issues raised in last week’s multiday confirmation hearing before the Senate Judiciary Committee. Clarity on this issue is needed before the committee, and then the full Senate, make their decision regarding Jackson’s nomination to the Supreme Court.

Federal law distinguishes among three types of child pornography cases: production, possession, and distribution. During the hearing, Democrats repeatedly offered two different standards for evaluating Jackson’s sentences for these crimes as a judge on the U.S. District Court for the District of Columbia.

First, Democrats said we should compare Jackson’s sentences to those of U.S. District Court judges nationally. The risk, of course, is that this might expose a broader failure of federal judges to grasp the unique devastation that child pornography wreaks on victims.

But let’s do what Democrats said and compare both the length of Jackson’s sentences and their relation to the range recommended by the U.S. Sentencing Commission’s guidelines with the national average. By either measure, based on the Sentencing Commission’s most recent data, Jackson’s sentences were significantly more lenient than other federal judges for all three categories of child pornography crimes.

Including what Durbin left out paints quite a different picture. Many of Trump’s appointees to the U.S. Court of Appeals had, like Jackson, previously served on the District Court. In stark contrast to Jackson, 45% of their sentences for child pornography were within or above the range recommended by the guidelines. Oops.

So one thing that we know is that, using either standard demanded by Judiciary Committee Democrats, Jackson’s sentences in all three categories of child pornography crimes were significantly more lenient than those of other federal judges. In fact, in more than half of her cases of child pornography distribution, Jackson didn’t add a single day to the mandatory minimum sentence already imposed by Congress.

Such a blindspot is especially disturbing since all categories of child pornography crimes inflict ongoing, often life-long, harm on children. The Sentencing Commission’s reports explain that these crimes are growing “substantially both in total numbers and as a percentage of total [court] caseload.”

Citing myriad studies and Senate reports, the Supreme Court stated in the 1982 case of New York v. Ferber: “Sexually exploited children are unable to develop healthy affectionate relationships in later life, have sexual dysfunctions, and have a tendency to become sexual abusers as adults.”

Pornography poses an even greater threat to the child victim than does sexual abuse or prostitution. Because the child’s actions are reduced to a recording, the pornography may haunt him in future years, long after the original misdeed took place. A child who has posed for a camera must go through life knowing that the recording is circulating within the mass distribution system for child pornography.

And in Paroline v. United States (2014), the Supreme Court acknowledged that “the full extent of this victim’s suffering is hard to grasp.” Ongoing distribution of the images of her rape, the court said, “meant the wrongs inflicted upon her were in effect repeated.”

As she put it in a victim impact statement: “Every day of my life I live in constant fear.” This resulted in depression, drug abuse, the inability to care for herself, and the need for long-term therapy.

As America’s Founders designed it, the Senate’s role in the judicial appointment process is to prevent appointment of “unfit characters” by identifying “special and strong reasons” why a nominee should not be appointed.

Every senator must determine whether, based on this and other issues, those reasons apply regarding Jackson’s nomination to replace Justice Stephen Breyer. Doing so requires accurate and complete information rather than spin and distraction.

When it comes to child pornography crimes, Jackson’s record includes downplaying the seriousness of such cases, followed by a consistent pattern of lenient sentences.