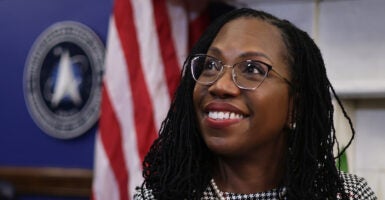 Supreme Court nominee Judge Ketanji Brown Jackson, seen here Tuesday, was unable or (more likely) unwilling to answer what should have been an easy question, “Can you provide a definition for the word ‘woman’?”, despite being one herself. (Photo: Alex Wong/Getty Images)

The Senate Judiciary Committee is set to vote on the nomination of federal appeals court Judge Ketanji Brown Jackson to the Supreme Court on April 4.

The nomination likely will be forwarded to the full Senate with no recommendation on an 11-11 committee vote, with all the Republicans on the panel against it and all the Democrats in favor.

As much as for her appallingly lenient sentencing in child pornography cases, Jackson’s nomination should be defeated in the full Senate because of her jaw-droppingly woke answer on March 23 to a simple question from Sen. Marsha Blackburn, R-Tenn.

In the context of the societal battle over transgender issues, Blackburn asked: “Can you provide a definition for the word ‘woman’?”

It wasn’t a trick question, nor one of semantics.

“No, I can’t,” Jackson stammered. “Not in this context. I’m not a biologist.”

Blackburn’s query was akin to the rhetorical questions “Does a bear [sleep] in the woods?” and “Is the pope Catholic?” And it should have been just as easy for Jackson to answer—regardless of “context.”

Had a judicial nominee of a Republican president offered an equally asinine answer to a Democratic senator’s question, the left-wing late-night TV “comics” would have mined comedic gold from it—and rightly so.

But because Jackson, a leftist activist judge, is the nominee of a liberal Democratic president, and her (not “their”) answer was indefensible, the late-night hosts conspicuously haven’t ridiculed it as they should have. ABC’s Jimmy Kimmel even criticized Blackburn for having the temerity to ask the question in the first place.

So, let me help Kimmel, Stephen Colbert, “Saturday Night Live,” and the others out with 20 more questions they could have jokingly suggested Jackson be asked—and how she might have answered them:

• “Is that an alligator or a crocodile?”
“I don’t know. I’m not a herpetologist.”

• “Is that a ball or a strike?”
“I don’t know. I’m not an umpire.” (Hat tip to Chief Justice John Roberts, of whom Jackson might soon be a colleague)

The bottom line here is this: The real “science denial” today is on the left, and it has nothing at all to do with climate change.

Democrats’ science denial—encapsulated in Jackson’s answer “I’m not a biologist”—is with respect to genetics and chromosome science.

Facebook’s faux 58 genders notwithstanding, the biological reality is that there are only two—XX and XY (i.e., female and male, respectively)—as has been heretofore unambiguously acknowledged for more than 2,500 years of recorded human history.

Jackson surely knows this. As such, when she ascends to the Supreme Court—as she likely will, because of the Democrats’ Senate majority—she should recuse herself from all Title VII and Title IX sex discrimination cases since she can’t or won’t acknowledge the obvious.

This column first appeared in The Washington Times