Biden’s Gaffe About Putin Could Have Serious Consequences for Ukraine 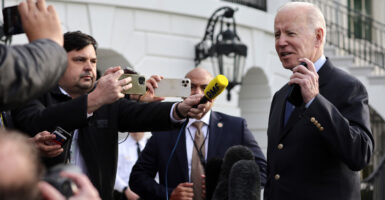 President Joe Biden—seen here speaking to members of the press prior to departure March 23 for Europe to meet with NATO and EU leaders to discuss Russia’s invasion of Ukraine—made incendiary remarks about Russian President Vladimir Putin that the White House later "walked back." (Photo: Alex Wong/Getty Images)

This week’s events, particularly those in Brussels and Poland, have left little reason for optimism.

There is not a single leader in the world today whose staff is stepping out at the United Nations, in Washington, or on the ground in Brussels to correct, walk back, or clarify what their country’s elected leader truly meant to say.

It is unseemly, and it is unprecedented.

President Joe Biden made remarks so inflammatory that many believe it could spark further fighting and death in the Ukraine-Russia conflict. Self-described “gaffe machine” Biden supposedly “ad-libbed” in his speech for regime change in nuclear-armed Russia: “For God’s sake, this man cannot remain in power.”

Secretary of State Antony Blinken, a long-serving Biden aide, swiftly muddied the matter by asserting that the president did not mean what he said. Was this merely a genuine blunder, or was it a calculated escalation by the same neoconservatives who campaigned for a series of disastrous government overthrows throughout the Obama administration?

It seems to be that Americans, in general—but particularly those in Washington—are deafeningly silent over Biden’s blunder, something that is far more terrifying than the apparent absence of the president and vice president from the world’s most powerful nation at the moment.

I anticipate hearing a seething address from Russian President Vladimir Putin this week regarding Biden’s statement. Putin’s public statement, which will most likely be linked to some type of action on the battlefield, will almost certainly be far more meaningful and effective than the drivel from Biden’s trip to Brussels.

After all, the leader of a war-torn nation was seemingly threatened by the leader of the most powerful nation in the world. If Putin is ready to take Russia down with him, then I would expect no less from him than unambiguous action on the battlefield.

In addition, Biden has declared war on “oligarchs.” But is it as simple as that? Virtually all of President Volodymyr Zelenskyy’s Ukraine is currently controlled by six Ukrainian oligarchs who came to power after the 1991 Ukrainian independence referendum. These six oligarchs control everything from banking to agriculture to energy.

On top of this, there are also the revelations of the Pandora Papers, which show that Zelenskyy himself possesses a series of offshore companies (hastily transferred after disclosure to wife and friends) whose purposes seem to be a mystery at this point.

These issues are just a few of the many that are occurring at the moment that are a cause for concern: Taiwan’s maritime routes and islands are being investigated by China. A new ballistic missile has been launched by North Korea. And individual military units, as well as the logistics infrastructure that comes with them, are being redirected to Ukraine or repositioned within Russia.

The two takeaways that posed the greatest threat were Biden’s remark to the 82nd Airborne Division—“when you get to Ukraine”—and his unambiguous call for a regime change in Russia.

Even though Biden is a scattered old man, anyone who has witnessed a parent or elder relative suffer from dementia or Alzheimer’s disease understands that in the early stages of these conditions, people rarely say things that are utterly out of character. Instead, they inadvertently and out of focus repeat what they have heard.

Biden didn’t make these two “missteps” in the spur of the moment; rather, he repeated topics that he had witnessed in a prior discussion. Regime change and force deployments are undoubtedly on the table, and Biden reiterated what he has heard for weeks.

The United States cannot continue to drift in this direction. Iran is expected to respond this week, and the Joint Comprehensive Plan of Action negotiations have already been placed on hold. It is extremely likely that they will not agree to a nuclear deal since they see no reason or benefit to doing so.

Increased sales to Russia and China, as well as illegal sales through Iraq, are allowing Iran to avoid sanctions. Iran can blend in its crude oil and export it through Iraq with, likely, a million barrels per day. At approximately $100 per barrel, there is no need to do anything but cash in right now.

The West is headed toward a likely severe food shortage later this summer. The poorest nations would be the first to suffer from the shortage. Few people realize how much grain and other commodities originate from Ukraine. The invasion has caused the planting season to be disrupted.

At the moment, the majority of central Ukraine resembles Kansas; it is flat, with cultivated fields stretching as far as the eye can see. Those farms will be dirt in summer, and once the topsoil has dried out from the winter, it will blow away. Crops are required to avoid erosion in these lush farming regions.

It’s going to be a long and arduous road to November.